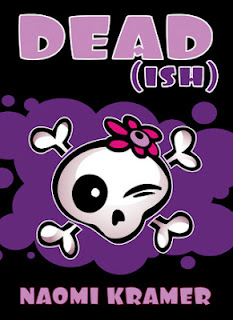 Linda’s had a bad day. First her boyfriend killed her. Then she woke up, still on this boring plane of existence, and with an odd obsession about her missing body. Mike won’t tell her what he did with her body, and she can’t find the stupid thing herself. There’s only one thing she can do - torment the bastard until he coughs up the information.

It's no shock to anyone who knows me that the reason I bought this book was purely because of the cover. Little cute skulls will always make me go, "Ooooh".

I loved this book, it was really funny and a very quick read. I read it on my lunch hour at work. And even though it uses the exact style which I was just saying I hated in another review, I could look past that because the book was just so easy to read.

Linda is a funny lead and the way she keeps trying to get revenge on Mike is just brilliant. Lets just say he never knows what he'll look like when he wakes up. There are others in this series, with similarly cute covers which I am now going to read, I don't know if it is a series as such or just books with similar storylines.