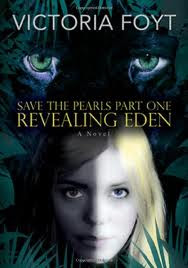 In a post-apocalyptic world where resistance to an overheated environment defines class and beauty, Eden Newman's white skin brands her as a member of the lowest social class, the weak and ugly Pearls. Doomed unless she mates soon, Eden hopes a Coal from the dark-skinned ruling class will save her. But when she unwittingly compromises her father's secret biological experiment, perhaps mankind's only hope, Eden is cast out - into the last patch of rainforest and into the arms of a powerful beast-man she believes is her enemy, despite her overwhelming attraction to him. To survive, Eden must change - but only if she can redefine her ideas of beauty - and of love. Along the way, she receives some beautiful insight from her virtually adopted aunt Emily Dickinson.

I was actually surprised by how political this books was. It's very race centred with the "coals" being the ruling race and looking down on the lowest-of-the-low "pearls". "Pearls" have a special section on public transport and they work mainly as lowly servants to the "coals", it's all like a reverse of the real racism that used to happen and, unfortunately, is still going about. In this post apocalyptic world, the sun's radiation is too high for people to go outside in the daylight hours. The lighter your skin, the more danger you're in. This means that "pearls" are low in number while "coals" are rising up. You must mate by your 18th birthday or you're cut off from all resources and "pearls" also have to cover up their white skin so they don't offend the "coals", and also so they don't get killed.

Eden has a job in a research lab purely because of her dad's genius, a pearl would never have such a high job otherwise. She unwittingly brings about the downfall of her dad's experiment and she and her father must escape along with her father's newest test subject. Eden's views change drastically while stuck in the jungle with Bramford, her former boss and father's current test subject.

I think Eden is a relatable lead, although there are times when her immaturity and misplaced anger make you shout at her. She thinks Bramford hates her and aims her anger at him, not knowing the real reason for the way Bramford acts to her. I really enjoyed Bramford as a character, yes he was egotistical but he was also very centred and down to earth at the same time.

I don't think this book is for everyone but if you like dystopian/post-apocalyptic books that are different from the others? This is the one for you.