Pursuit of a Kiss by Lola Drake 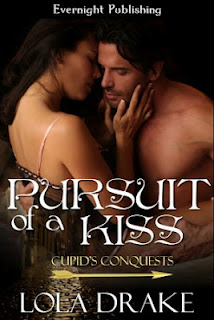 Ousted from Olympus until he can restore true love back to the world, Eros stumbles upon a match made in heaven - if they can survive through hell first.

Juliet doesn't have much in common with her namesake. Her career-centric life sorely lacks romance. Then one night everything changes when she witnesses a gang shooting and ends up getting shot herself.

FBI Agent Jake Parker has known Juliet for years, but only as the baby sister of his best friend. He still imagines her as the awkward teenager she used to be. When Jake must protect Juliet from the gang determined to eliminate the only witness against them, he discovers that he's not the only one who's changed in the last ten years.

Will Jake take the risk of having a real relationship? Will Juliet survive long enough for him to decide? The pursuit of a kiss has never been so dangerous, or so much fun.

This is the 3rd in the Cupid's Conquests series from Evernight Publishing, put together by Seleste deLaney who also wrote the first story, Gunshy. The second, Going the Distance, is by Angela Addams.

In this one, we get to meet of Eros' family at the beginning when his father comes and gives him a kick up the arse to get a move on. He sets about putting Juliet and Jake together, Juliet's just broke up with her 5 year boyfriend and Jake has never had an actual relationship. Turns out Juliet has had a crush on Jake since she was a kid but Jake never noticed her, now he wants her bad but doesn't want to take advantage of her in her traumatic state. Turns out he doesn't need to worry about that, Juliet wants him to help her forget.

As with most short stories, there isn't time to build up characters the same as in an actual book but Drake manages to write her characters well in the short time. The build up the kiss happening is hot, and when they actually get together it's amazing. Loved it. Definitely recommended, especially if you're a fan of the previous two Cupid's Conquests stories. Even if you're not but you love a short steamy tale? I recommend reading all three.


Buy Pursuit of a Kiss