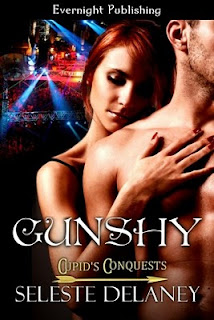 Banished from Olympus with orders to restore love to the world, Eros starts with a match no one sees coming. No one but him.

Straight-laced principal Kira isn’t looking for love, especially not right after getting dumped. Then a chance encounter leads her to Jesse, and damned if she isn’t drawn to the bad-boy with a heart of gold. A night of reckless abandon leaves her confused. Was there something there, or did she imagine the connection between them?

Jesse knows lying to Kira is a mistake, but she's the first woman in a long time to see the man and not just the rock star. When his plan to come clean goes terribly wrong, Kira bolts, leaving Jesse in the dust.

Now Eros has to nudge the star-crossed lovers together and prove to Zeus that love does exist, even among the gun shy.

Buy the kindle from Amazon: Gunshy by Seleste deLaney

or direct from Evernight Publishing: Gunshy by Seleste deLaney

A very short but hawt first book in a new series from Evernight Publishing. It's a multi-author series, so each book is written by a different author.

Eros gets banished from Olympus and has to restore love to humans. Judging by this story I'm guessing that each story will follow a different couple that Eros helps get together to prove to Zeus that he can still do his job.

I've read a lot of Seleste's books and I have to say, this is the first book of hers that has a lead male that I could find myself attracted to. Jesse is a big guy and he has tattoos and plays bass, what more could I want. I also liked Kira, as little as we got to know her in this short story she was a strong lead. I'll still read the rest of the series but Seleste was definitely the only reason I bought this. Got to support my buddies after all :D