Review: Halfway to the Grave

Halfway to the Grave (Huntress book 1) by Jeaniene Frost 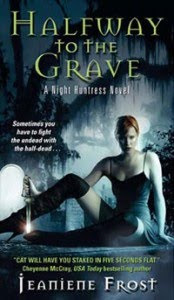 Half-vampire Catherine Crawfield is going after the undead with a vengeance, hoping that one of these deadbeats is her father – the one responsible for ruining her mother’s life. Then she’s captured by Bones, a vampire bounty hunter, and is forced into an unlikely partnership.

In exchange for help finding her father, Cat agrees to train with the sexy night stalker until her battle reflexes are as sharp as his fangs. She’s amazed she doesn’t end up as his dinner – are there actually good vampires? Pretty soon Bones will have her convinced that being half-dead doesn’t have to be all bad. But before she can enjoy her status as kick-ass demon hunter, Cat and Bones are pursued by a group of killers. Now Cat will have to choose a side … and Bones is turning out to be as tempting as any man with a heartbeat.

First off I liked the characters. Bones and Cat work well together and there's a nice chemistry between them. Cat's mother and grandparents are kinda off putting but they're not main characters so I can deal with that.

My main problem with this book is Bones' language. The author seems to overuse any words she sees to be English, sometimes, in my opinion, out of context. It bugs me to the point that I'm still wondering whether I want to read the next book or not.

Overall, it's a great book and a great read. As I said Bones' voice can get annoying after time but it wasn't annoying enough to get me to stop reading.
Posted by Julie-Anne at 15:48 No comments: