It really was a Wicked trip. We travelled down to London to see Wicked on stage at the Apollo Victoria and had a few days to dot about and do the tourist thing. What follows is what we saw with some pictures and how I liked it.

We arrived on Monday morning and were lucky to get checked in early to our hotel so we dumped our bags and headed off to the city. 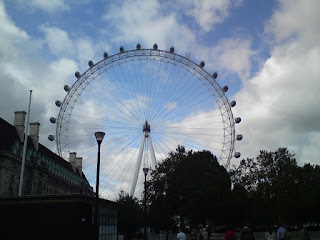 First thing was the London Eye. It was fun and definitely something to do at least once if you're in London, the views are not something you'd see anywhere else. 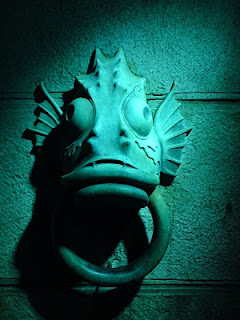 Then it was onto the Aquarium. I like Aquariums and I mentioned to my partner this time that I don't know why I'm alright with Aquariums but not zoos when it's basically the same thing. Animals being put in a simulted environment for our entertainment and enjoyment.
I don't know if it's because aquariums at least try to make the environment like the real ones. Whatever it is I like visiting aquariums but absolutely hate zoos.
So yeah, the London Aquarium is worth a visit but I suppose it's the same as most aquariums.

As we exited the aquarium we were confronted by a TV showing people screaming and people covered in blood. Naturally we stopped to watch it.
It was Death Trap by the Fright Club. An interactive show where the tourists are being shown round a psychiatric hospital that is having some problems. As you enter the hospital the lights go out and you have to help the Dr find the key to get out and find the exit.
The patients are wild and will try to stop you from leaving by grabbing you or trying to scare you. It's amazing how frightening an experience it is when it's pitch black and someone grabs your ankle from behind (what you thought was) a wall.
The idea is brilliant and I definitely recommend it to anyone visiting London. 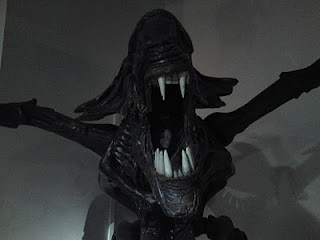 Next up was the Film Museum, also next to the aquarium. It's a trip through British film studios and also has props and costumes from well known films. There was some great things on display including a Ray Harryhausen exhibit which, unfortunately, you weren't allowed to take pictures of. A must see for any film fans out there.

That was the end of Monday, we'd been non stop for basically 12 hours by this point so we went to the hotel and chilled for the rest of the night.

Tuesday has a fairly disappointing start, we went to Camden market but apparently most of the market holders don't like to get out of bed early so there wasn't a lot of stalls open.

So we headed down to Picadilly where we met a friend for lunch and bought some books then we went into Ripley's Believe It or Not. Most people have heard of Ripley's, it's basically what would have been called a freak show in days gone by. Some really cool things on show here. The first thing you see is a hubcap gorilla then when you get upstairs there's a Mini all bedazzled and decorated with Mount Rushmore. Blingtastic!
One thing that made an impact was a very simple display. A small sink full of water that's the temperature they think the water was the night Titanic sank. It was painful after about 2 seconds and I pretty much lasted about 10 seconds before I had to take my hand out. I could still feel the pain about 5-10 minutes left.

After that we headed back to the hotel to rest a bit before we went to see Wicked! 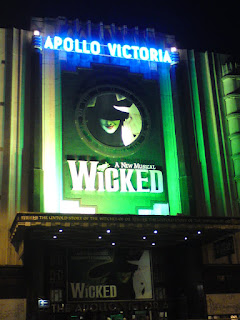 Based on Gregory Maguire's book about the Wicked Witch of the West's upbringing and life before Dorothy cruelly killed her.
I loved this show so much. As soon as it was over I would've happily watched it again. The music was thrilling, I had goosebumps. The story adaptation was good and funny as hell. The cast was amazing, very well chosen. The sets were gorgeous and colourful, as were the costumes.
The whole show was just fantastic and a definite must see if you liked the book.

We picked up a map at the reception and headed for the Natural History Museum. 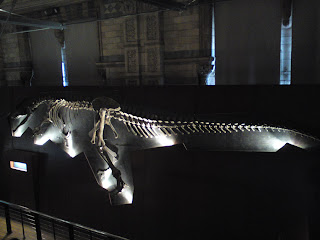 I like museums but unfortunately we chose the same day that all the schools chose. This made for a very annoying trip as kids were everywhere and kids are noisy and annoying as all hell!

We then headed to to the Cartoon Museum but when we got there we realised it wasn't as good as it sounded so we left and went to the British Museum instead. 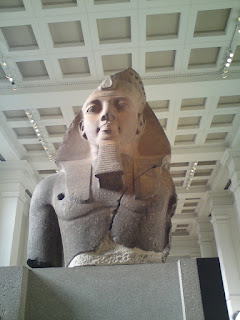 Not as many kids in this one so a big bonus but unfortunately after 2 whole days of walking, our feet (and my back) had decided they didn't want to play anymore! So we got about 1/4 of the way round before deciding to give up and return next time we're in London.

So we headed to the Tower of London where we were planning on joining a Jack the Ripper walk later that evening. We got there early and sat down in a wee park just to give our tootsies a rest.
The walk was fun and very informative. There was a lot I didn't know about Jack the Ripper! Our guide was very entertaining. I recommend this but go with Ripping Yarns as they have a good rep and some good reviews on their website.

Thursday was home day :(
We had to check out by midday then we basically just spent all day at the airport 'cos the weather was horrible and we didn't feel like wandering about (with our cases) in the pissing rain.

And that dear readers (all 2 of you probably) was our London trip.
Posted by Julie-Anne at 14:47 1 comment:

Dancing with the Devil by Keri Arthur

Having grown up on the tough streets of Lyndhurst, Private Investigator Nikki James believes there is nothing left to surprise her. That changes the night she follows teenager Monica Trevgard into the shadows and becomes a pawn caught in a war between two very different men. One fills her mind with his madness; the other pushes his way into her heart. Nikki knows how dangerous love can be but, if she wants to survive, she must place her trust in a man who might destroy her.

For three hundred years, Michael Kelly has existed in the shadows, learning to control his vampiric death cravings. Nikki not only breaches his formidable barriers with her psychic abilities, but makes Michael believe he may finally have found a woman strong enough to walk by his side. Will his love be enough to protect her from a madman hell-bent on revenge? Or will the secrets they keep from each other prove to be the greatest threat of all?

I know I like Keri's writing, I love her Riley Jenson Guradian series. But for some reason my reading of this book was very slow going! I don't know what it was about it that didn't grab me.

It may have been the story. It was quite slow going and sort of boring, things seemed to be repetitive and would happen again and again.

It may have been the characters. Nikki annoyed me in a way I can't describe. Her personality bugged me. Her refusal for help bugged me. Her complete distrust of Michael bugged me. I just didn't find her to an interesting character.
Michael was fairly likeable but I preferred Jake.

Not a book I'd recommend but anyone who is a fan of Keri Arthur may pick it up because they are a fan of the author, it's the reason I bought it in the first place but I really don't think I'll be reading the rest of the series, or I, at least, won't be buying it. Maybe in a while I'll get it from the library.


Book Depository: Dancing With The Devil
Amazon UK: Dancing with the Devil

OK so technically it was yesterday as it's now after midnight but I was working tonight so I couldn't do anything for it.
This made me think about books I liked when I was younger, Roald Dahl or not. I still have some in my collection now. I don't know about anyone else but Roald Dahl was a mainstay in my school's library, right up to Primary 7. I highly doubt I've read all his books but I have definitely read a good chunk.

Of the non-Roald Dahl books I loved as a kid, I still own Carbonel and The Chronicles of Narmo. I read all the Sweet Valley books over my lifetime and recently found out that they are being brought back out again! I also read all the point books, for example point horror, point romance etc. They were aimed at teenagers. I still own the Forbidden Game trilogy and still love Julian. I think he may have been my first literary crush.

What were your favourite books as a child?

Oh and I still love The Very Hungry Caterpillar.
Posted by Julie-Anne at 00:19 No comments:

The official trailer for the long awaited Alpha. The latest and FINAL shifters book by Rachel Vincent. I love this series and I'm quite sad it's ending but I suppose it's good to end it on a high rather than drag it out.

Can't wait to read it and this is a wee sneaky contest entry at the same time.
Posted by Julie-Anne at 16:30 No comments:

WARNING! MAJOR SPOILER FOR BOUND TO SHADOWS IN BLURB!!

Shape-shifting werewolf and vampire Riley Jenson is through with death - causing it, solving it, surviving it. Her soul mate Kye Murphy is dead - and at Riley's own hands. Not even the seductive embrace of her vampire lover Quinn can fully ease her mind, for she has begun questioning everything that makes her Riley - including her job at the Directorate.

But then ritualistically slain bodies of ex-cons start turning up. Reluctantly, Riley takes the case, but something even worse is waiting in the wings. For a vicious enemy from her past is determined to strip Riley of everything that gives her life any meaning: her lover, her twin brother - and even her own identity. Can Riley survive this ultimate assault? All she knows is, she must fight one last time to find answers, before everything goes dark for ever ...

Book 9 (and I believe the last book) in the Riley Jenson Guardian series. Ms Arthur is currently writing a spin off from this series introducing Risa as a main character.
This was a great end to a good series. I had started to lose interest in the series about 3-4 books ago because they seemed to be purely sex focused. I'm glad I hung in there and stuck with it because it picked up and focused on the story more in later books.
The only thing that put me off was all the self-loathing at the beginning and the 'woe is me, I killed my soul mate'. I get that that's a BIG thing in these books but it was kind of off putting and made me want to skip right to the exciting bits, luckily for me, Ms Arthur doesn't keep us waiting too long.

Overall, the book is funny and intriguing. Made me keep reading because I do like Riley as a character and I like reading her life and quips and relationships. Especially her relationship with her brother (who I also love). If you've read the others or even started this series and gave up, I strongly suggest finishing the series the way it was meant to be finished.