Fall With Me by Julie Particka 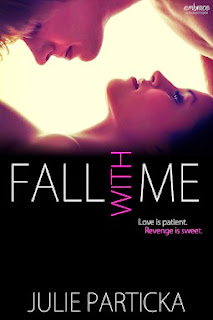 Dumped by her college boyfriend for her best friend, the last thing Jenna Brandt needs to deal with is working beside her backstabbing-BFF's hotter-than-hot brother. But when he offers her a chance to get some revenge on her ex, she can hardly say no - even if spending more time with Sutton puts her heart in jeopardy all over again.

Someone's going to get hurt...

Sutton Bell has had a thing for Jenna since they were in high school, but after one screwed-up night, she didn't want anything to do with him. Now, with just the summer before he leaves to begin his new career, Sutton's determined to convince Jenna he's not the player he used to be. But saving his sister from making an awful mistake may mean losing Jenna for good.

Jenna's best friend and fiancé (secret since he never allowed her to tell anyone) cheat with each other and break Jenna's heart. She hides out at college for a couple of weeks after she graduates 'cos she doesn't want to tell her family about what happened. When she finally goes home, she has to work with the same best friend's brother - who she had the hots for and embarrassed herself over in high school. What she doesn't know is that Sutton also had the hots for her - and still does. When they get together, the sparks are still there and they can't ignore them.

After the fab Pretty Souls, Particka has finally came out with a new book. Don't think that it has anything to do with Pretty souls - it doesn't, I'm still waiting for that one. The characters are fun (if a bit dull - Jenna) and the relationship between Jenna and Sutton is real and well written.

Spoilers follow - highlight to read: I didn't understand Lacey's need to get married just because she's pregant - I mean, it's not exactly a stigma anymore. But she was more than willing to marry a guy she didn't love and was actually well aware of the fact that he's a giant douchenozzle just so she didn't have a child while she was single? I can't understand that and it made her character a bit unlikeable .... well, even more unlikeable since she did sleep with her best friend's fiancé.

Besides that, I really did enjoy this book and was really glad that the author is writing as Julie Particka again. I'm hoping this means more from this alter ego and perhaps .... more from the Paranormal Response Team?


Amazon UK: Fall With Me