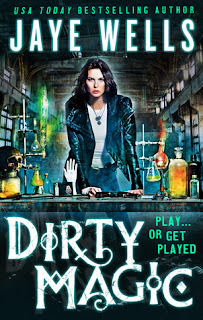 Magic is a drug. Careful how you use it ...
The Magical Enforcement Agency keeps dirty magic off the streets, but there's a new blend out there that's as deadly as it is exclusive.

When patrol cop Kate Prospero shoots the lead snitch in this crucial case, she's brought in to explain herself. But the more she learns about the investigation, the more she realises she must secure a spot on the MEA task force.

Especially when she discovers that their lead suspect is the man she walked away from ten years earlier - on the same day she sworn she'd given up dirty magic for good. Kate Prospero's about to learn the hard way that crossing a wizard will always get you burned, and that when it comes to magic, you should never say never.

Kate gave up magic ten years ago after a tragic event but after she shoots and kills a man high on some new potion, she ends up becoming involved in the case that he was a snitch for. Unfortunately this brings her in close range with magic again as well as a man she also gave up ten years ago.

I love Kate Prospero! She's a really fun heroine ... she's spunky, kick ass and has a talent for magic. She manages to fill the void left by Wells' Sabina Kane departure. Although only time will tell whether Kate will get her own Giguhl like sidekick (that'd be awesome though).

Anyone who's read my reviews of the Sabina Kane books will know exactly how much I love Jaye Wells writing. She writes really great, strong heroines and she does her research! She went to a police run bootcamp to learn more about law enforcement so she can write true-to-life characters.

I really enjoyed this book and am looking forward to getting more into this series with each release. BRING ON BOOK NUMBER 2!

The Book Of The Crowman by Joseph D'Lacey 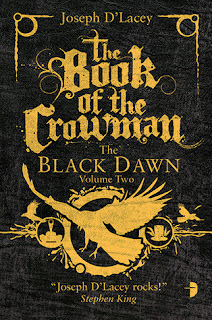 The world has been condemned. Only Gordon Black and The Crowman can redeem it. The search for the shadowy figure known only as the Crowman continues, as the Green Men prepare to rise up against the forces of the Ward. It is the Bright Day, a time long generations hence, when a peace has descended across the world. It is the Black Dawn, a time of environmental apocalypse, the earth wracked and dying.

Gordon Black is still seeking the Crowman so he can help the Green Men overthrow the Ward. Megan progresses with her training to being the Keeper, although she knows her journey is coming to an end. The Black Dawn still rages on and the Ward are even worse than they were at the beginning.

This is the sequel to Black Feathers, which I really enjoyed and this book is no different. I absolutely love the story behind Gordon Black and how the earth herself has turned against everyone for mistreating her for so long.

Gordon has grown so much and faced so much, he's basically alone in his search for the Crowman. Others believe in him and other even look for him but not in the same way as Gordon.

Megan has also grown into her role as trainee Keeper, she seems much more comfortable with her teaching and more confident in her new role.

One thing that disappointed me was reading that this is the last book - for some reason I thought it was a trilogy and I'm quite disappointed with the fact that it won't continue. Not for any particular reason, because D'Lacey really closed the story well. I really enjoyed the ending ... as much as I could anyway, and you'll know what I mean when you read it - which I highly recommend you all to do.

D'Lacey has a good way of world building and has some horrible characters in here which are all well written. Loved this series, loved the world and the characters and I love D'Lacey's mind.

Discover 3 sexy and 3 unforgettable stories in Entangled's February Novellas! From an email that causes a curse of bad luck in love. To a kiss that could change a princess's future forever. Or a secret agent with a strange ability working on a case that could cost her much more than her heart! There's something for everyone!

Secret Agent Marissa Jones has a gift. A con artist to the core, after deep hypnosis she can turn into someone else entirely. Marissa's gift has gotten her into hot water over the years, but now more so than ever. With her smoking hot partner by her side, she needs to convince him that not only is she her true self, but also that she can be trusted — even in spite of her past.

Trevor Harris has his own issues with the mission, he's got revenge to seek, a cursed painting to secure, and Marissa's sugary-sweet alter-ego to ignore. But when he releases Marissa from her mental cage and things get a little too hot, he ends up finding out what falling for a con artist really means — bigger trouble than ever before.

Every princess should be kissed. And by a man who knows what he's doing. Beatricia had been enjoying just that with Farris Turner when she was caught.

But running only drives her into the arms of a stranger. A man who wants to offer her one night together, to offer her the experience her life and duties in the city of Sun-Airor - a place set out of space and time - have denied her.
It'll be her only chance before she's forced to enter a loveless marriage ... but who exactly is her stranger? And what will kissing him reveal?

Dear Reader, this letter is to inform you of Cupid's curse, which will fall upon you if you don't pass this email on to three friends within three hours.

Tilly Morrow didn't believe in the curse and now she hasn't had a second date in three years ... because all her first dates end in disaster. In fact, she just accidentally punched a guy in the face, leaving her without a date for Valentine's Day!

Bryant Murphy isn't sure if the curse is real or not, but if dating Tilly means occasionally getting assaulted with a chocolate shake or nearly electrocuted, it's worth the risk. Armed with more lucky charms than a bowl of cereal, Bryant will have to battle flying swords, Russian mail-order brides, and shrimp linguini if he's going to win the girl.

Barnes & Noble
Kobo
Posted by Julie-Anne at 14:00 No comments:

Conning For Keeps by Seleste deLaney 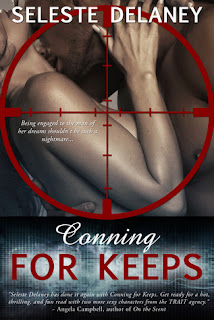 Lovers undercover... Secret Agent Marissa Jones has a gift. A con artist to the core, after deep hypnosis she can turn into someone else entirely. Marissa's gift has gotten her into hot water over the years, but now more so than ever. With her smoking hot partner by her side, she needs to convince him that not only is she her true self, but also that she can be trusted — even in spite of her past.

... or traitors to the cause? Trevor Harris has his own issues with the mission, he's got revenge to seek, a cursed painting to secure, and Marissa's sugary-sweet alter-ego to ignore. But when he releases Marissa from her mental cage and things get a little too hot, he ends up finding out what falling for a con artist really means — bigger trouble than ever before.

Marissa is a former child con artist that has been recruited by the good guys, only problem is that not all her co-workers think she's fully reformed. Trevor has to work with Marissa on this mission but he thinks she's only in it for herself, and not trusting her means keeping a close eye on her. Unfortunately, that also means being close to the woman he's been wanting for years ..... and the feelings are mutual.

This is the second book in this series by deLaney and I really enjoyed this one. I liked Marissa's background, the whole former child con artist that her parents had basically brainwashed - she will take on personality given to her under hypnosis, making her the perfect person to have on a con. Trevor's back story wasn't as interesting but held a lot of stake in the mission so he had some problems to overcome himself.

The chemistry between Trevor and Marissa is amazing! deLaney has a talent for writing awesome sex scenes. But her stuff isn't all about the sex, she also writes amazing storylines and highly likeable characters.

Definitely a recommendation for your "To read" list/pile.