Dying for Keeps by Seleste deLaney 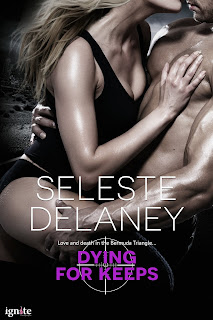 Greta Gallagher is TRAIT's secret weapon. With her uncanny ability to sense trouble before it even happens, she's an invaluable asset to the team and her partner, Nico Tancredi. Except that ever since she botched the last mission, her "gift" has been completely MIA ... and she needs Nico's help to find it again.

Nico has the ability to manipulate anyone except Greta. His challenge is to figure out how her mind works, without letting their attraction - unspoken and untried - get in the way. It does ... and it's more intense than either of them imagined. But deep in the waters of the Bermuda Triangle, a terrifying secret waits for them both. A secret that doesn't just threaten their love, but their lives ... and the very heart of TRAIT itself.

This is the final title in the TRAIT series and it's definitely one of my favourites. Although ask me to list them 1-4 and I'd have difficulty - I've honestly liked the entire series.

One thing I loved about this particular title is it doesn't use one of the most common romance tropes - one of the characters has a secret they're not telling the other and you just know the wronged party is going to find out and it'll cause tension between them that they'll have to work past. I hate that plotline and feel it gets way overused but thankfully not in this book.

Greta and Nico are determined to find the link between all the latest TRAIT cases and find out what's going on above TRAIT's head. The whole TRAIT agency works as a team to help and all the previous books get tied together. It's actually a nice ending to the series, there are no open endings and everything's finished up.

.....Except I still want my Marron story!

I've really enjoyed this series and am kind of sad to see it end even though deLaney has done a fantastic job at doing so. I recommend this series to anyone looking for some fun, short and sexy reads.

I listed all the sites I could think off the top of my head for buying
Amazon UK: Dying for Keeps

Pen Holloway's done with men - in real life. Guys in game are so much less drama. But when her partner from Heroes of Fallen Gods invites her to the convention of the year, she panics. What if he's another jerk? What if he's not?
Cal Burrows is living his dream of being a spy. One of TRAIT's misfit spies, but still a spy. It's the perfect job ... until an arms dealer with a taste for blood invades his not-so-secret geek haven. All Cal wanted from ConDamned was to meet his on-line girl. Now, with the threat of mass murder looming, he's forced to choose between keeping his mission a secret and protecting the girl of his dreams.
Despite their attraction, Pen can't help but suspect Cal's hiding something. She also can't shake the feeling he's not as much of a stranger as he seems.

Secret Agent Marissa Jones has a gift. A con artist to the core, after deep hypnosis she can turn into someone else entirely. Marisa's gift has gotten her into hot water over the years, but now more so than ever. With her smoking hot partner by her side, she needs to convince him that not only is she her true self, but also that she can be trusted - even in spite of her past.
Trevor Harris has his own issues with the mission, he's got revenge to seek, a cursed painting to secure, and Marissa's sugary-sweet alter-ego to ignore. But when he releases Marisa from her mental cage and things get a little too hot, he ends up finding out what falling for a con artist really means - bigger trouble than ever before.

Since her partner's death, Jodi Israel has been perfectly happy playing Q to everyone else's Bond. Electronics and machines are safer - and they are a lot easier to deal with. Unfortunately, she's stuck with TRAIT's newest recruit, an infuriating, arrogant alpha-male who plays by his own rules ... and is hot enough to send electric voltage through all of Jodi's circuitry.
Finn Danby heeds his instincts, even though it's cost him his job on more than one occasion. The moment he sees Jodi's fiery hair and uncanny engineering abilities, Finn's instinct takes over ... and it's all libido. Now they're working together to protect the unstable daughter of a high-profile politician - and the sparks are flying. Both in and out of the bedroom. But when all hell breaks loose, Jodi and Finn just may find themselves alone ... and unemployed.
Posted by Julie-Anne at 12:00 No comments: 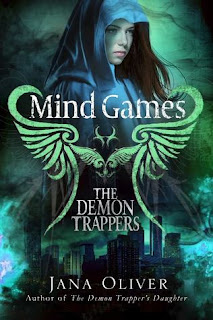 Riley Blackthorne's life as a Demon Trapper is about to hit the wall. Knowing she will always be a target for those who want to exploit her "connections" with Hell, she's learning defensive magic. It seems the only way to ensure she and her fiancé, Denver Beck, have a future together. But not everyone in Atlanta, or at the Vatican, is pleased by this news. In fact, some want to ban the use of all magic, and Riley would make the perfect scapegoat.

As a new demonic enemy stalks her, Guild politics roil the city, throwing the trappers into chaos. To protect herself and the man she loves, Riley will be forced to choose: continue in her legendary father's footsteps, or carve her own path. A path that may well lead to her losing everything she so desperately seeks to protect.

Yay, Riley and the gang are all back! I was so excited to read that Oliver was releasing a 5th book, it really is one of my favourite series and I've recommended it to a few friends. The first in the series is Forsaken, 2nd is Forbidden, 3rd is Forgiven, 4th is Foretold, 4.5 is Grave Matters. Although Grave Matters is really only a wee novella, I included it in the list since the story is relevant to Riley's future and therefore this book.

Riley's really matured since the start of this series, which I believe is less than a year in the timeline. She's been through a lot in her wee life and had to deal with some serious shit so it's easy to see why she's matured so much. This world just gets scarier as we learn more about hell and the demons it spawns - and I have a feeling we still have a lot more to learn. At least I'm hoping that's the case since I'm hoping Oliver writes more, the story definitely didn't seem finished. In fact, it did seem like more story threads have been opened in this.

I can't say anything bad about this series, I adore it. The world that's been created, the characters in it and the writing style are all fantastic and I'll continue to recommend this series to anyone that I think will enjoy it - which should be anyone that likes to read.

Jana Oliver self-published this so make sure to support her (and hopefully gain more books) by buying it from a legit seller - I've tried to list as many as I could find below.