Mistaken by Fate by Katee Robert 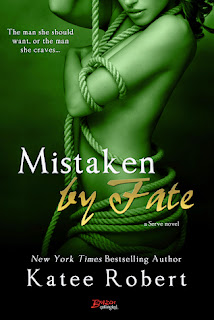 The man she should want, or the man she craves...
Fashion designer Ridley Ethridge thinks she's found the perfect, stable sort of guy in her childhood friend Will Reaver. With seduction in her sights, she arranges to rock Will's world at an exclusive club that caters to those with adventurous and erotic appetites. What happens next is both intense and satisfying — until Ridley's blindfold comes off to reveal Will's twin brother. The same twin who broke her heart eight years ago.
Former soldier Garrett Reaver hasn't ever gotten Ridley out of his system. And now that she's before him in all her submissive glory? He'll be damned before he lets someone else have her, especially his brother. Because Garrett and Ridley have some seriously unfinished business to take care of, and it starts now. And this time, he'll show Ridley how exquisite a relationship with him could be ... if their past doesn't catch up to them first.

Ridley wants Will, in part because he's the polar opposite of Garrett, so she plans to surprise him at Serve but she surprises herself and Garrett instead. Garrett is determined to win her over and spend more time with her, while Ridley is determined to have nothing to do with him but she can't deny the attraction. Can they have a happier ending than the first time round?

Another sexy addition to the Serve series and the first from Katee Robert - and what a start to the series from her. Although it would be hard to beat Oliver (from the Exposed by Fate) as my favourite {Sorry, Katee}, Garrett is definitely a close contender - although I'm looking forward to getting to know Will better in the next book. Ridley and Garrett have amazing chemistry and were clearly meant to be together, despite the bumpy start they had.

I love Robert's writing and this book is no different. I've been in a bit of a reading funk lately and authors like Katee Robert are what pulls me out of it.