Seducing Her Rival by Seleste deLaney 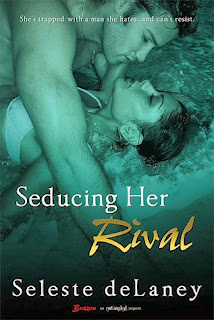 She's trapped with a man she hates ... and can't resist.

When cruise ship turbulence sends children's charity guru Mercedes Vega — and her tropical cocktail — flying into a mysterious stranger, she's convinced her free vacation is a dream-come-true. But Lucas Bellamy isn't just sexy as sin and richer than God. He's her business rival, determined to outbid her charity for the land she desperately needs ... a fact she doesn't learn until after a night of mind-blowing, toe-curling sex. Unwilling to give up, she formulates a plan to make the charming playboy fall in love with her and back out of the property deal.

Lucas is drawn to Mercedes, but he won't stand down — after all, he has promises of his own to keep. But one scintillating night with the enigmatic brunette leads to another, and before long, it's unclear who's seducing who, leaving Mercedes wondering whether the man she's supposed to hate is the only salvation from her past.

Mercedes has a history she's trying to make amends for by building a playground where kids can feel safe. Lucas has plans to build a school in memory of someone he loved and lost. Unfortunately, they're both after the same land and also both happen to be on the same cruise ship. What's even more unfortunate is that they're both mega attracted to one another. Mercedes wants to hate Lucas but can't keep away from him so she comes up with a plan where she can have her cake and eat it too.

I love anything Seleste writes, I will always read her stuff and, like with this book, I might not love the main characters but I still love the story and that's what counts. Only a few books have made me DNF due to really bad characters, for most the story is the important bit for me.