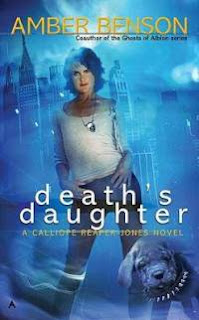 For the last few years I'd been in a state of bliss - living under a self-imposed Forgetting Charm, because I so did not want to go into the family business. What I wanted was a glamorous career in New York City and the opportunity for a normal life - buying designer shoes on sale, dating guys from craigslist, Web surfing for organic dim sum for my boss. And then my father's Executive Assistant, a faun named Jarvis, shoed up to tell me that my dad had been kidnapped.
Good-bye, Forgetting Charm. Hello, (unwanted) responsibility. Not only am I expected to step into the CEO slot on the company Board, but I have to "prove my worth" by competing against the Devil's protege - who's so hot in more ways than one. The contest involves finding three (why is it always three?) objects of power. In Hell.
One of them is this adorable puppy - who happens to be a hellhound. The others are turning out to be not much fun. All this so I can take (unwanted) charge of Death, Inc.
My name is Calliope Reaper-Jones, and I'm ... Death's Daughter.

To my knowledge, this is Amber Benson's first solo foray in the author world. She co-wrote The Ghosts of Albion series (on my Amazon wishlist) with Christopher Golden. She's also an actress, producer and director, in short she's a busy girl.

I enjoyed Death's Daughter, it was a bit slow to start but once it was actually into the storyline, the pacing picked up a bit. The characters are fun and I enjoy Calliope's relationship with her family, especially Clio, her younger sister. It's like most people's relationships so easy to relate to.
The storyline is fun. We get to follow Calliope to Hell and back as she completes her 3 tasks as well as dealing with family issues. Just so she can reluctantly take charge of her father's company and therefore save him and find his kidnappers and also save her family's lifestyle at the same time (if you read the book you'll know what I'm talking about here).
The ending was fun but sort of anti-climactic, I felt. Definitely worth a read though and I'll be buying the second book Cat's Claw.

Yet another driver rant

Haven't done a book review in ages but I thought I'd get another rant off my chest. I hate bank holiday Mondays because the Sunday drivers are out .... again! As if it's not bad enough to get stuck behind them on a Sunday, we now have to put up with them on Mondays too.

First off, we have some idiot pull out in front of me at a roundabout. Seriously? You can't possibly wait an extra TWO seconds for me to get off the roundabout?
Then we have some complete eejit who gets in the outside lane at a roundabout to go straight across, I'm going right so I'm in the inside lane. Fuckwit in the outside lane then proceeds to go straight across the roundabout nearly hitting me instead of going ROUND the ROUNDabout! The clue is in the feckin' name!!!
Posted by Julie-Anne at 00:01 No comments: