His To Keep by Katee Robert 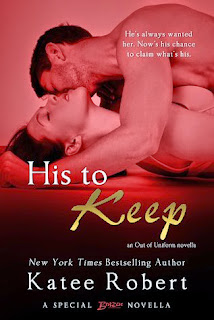 He's always wanted her. Now's his chance to claim what's his.

School teacher Marceline Bellini gave up everything — men, sex, anything resembling a social life — to raise her young daughter. To be the perfect parent. But when she attends an engagement party in her standard stick-in-the-mud mode, her friends begin plying Marcy with shots. Just enough to convince her that a little fun doesn't sound like a bad idea ... and having some naughty fun is an even better one.

Like finding herself deliciously pressed against a dark alley wall by the very familiar and very hot body of her best friend's older brother.

After years of waiting in painful silence, police officer Aaron Robinson finally has Marcy's attention. And man, does he have it. But nothing could have prepared either of them for the rush of fiery lust between them. So he'll just have to convince Marcy he's for real. And that a rainy, lust-fuelled romp is the first step to a lifetime of completely imperfect happiness…

Short but hot new story in Katee Robert's Out of Uniform series. Featuring a new couple that I don't think were mentioned in the first book? If they were I don't remember them.

Aaron has had feelings for Marcy since she was a teenager but he's never acted on them ... until she hints at wanting more. He's determined to have a relationship and not a quick fling. He's just got to convince her of it. Aaron's a BIG guy .... I like that. There's something about that whole imposing Alpha male thing ... very sexy.

I'm definitely enjoying this series so far and this wee short has made me want to read the next book and hope that my suspicions about the characters is true.


Amazon UK: His to Keep