How Beauty Met the Beast by Jax Garren 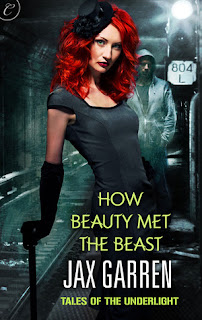 Scarred. Damaged. Living with a terrible secret. Agent of the Underlight Wesley "Hauk" Haukon has nothing left but the fight for liberty against the oppressive Order of Ananke. He's starting to lose hope ... and then he sees her.

Despite her night job as a burlesque dancer, grad student Jolie Benoit has always played the mostly good girl. That all changes following a scorching sexual encounter with a stranger whose face she doesn't see. After she's kidnapped by thugs and rescued by a man with a very familiar voice, Jolie becomes a pawn in a struggle she never knew existed.

Hauk knows he cannot have her, and resolves to protect his heart and his secrets. But as they work together and grow closer, he finds new reason to keep fighting. Dare he risk hope in a new life, one where Jolie can see past his ravaged face and where their friendship can grow into something more?

Hauk takes refuge in a friends burlesque club after being chased by some police-y type people, while there he sees Jolie dance and is instantly entranced. He catches her backstage and they have a steamy moment while a sheet separates them, she never sees his face. Later on he rescues her from kidnappers but she doesn't know it's him, he takes her back to his place and she discovers the Underlight - an underground anarchy group. As she gets to know Hauk, his appearance means nothing to her and she finds that she actually likes him - even more so when she discovers that he's her secret backstage seducer.

I actually really enjoyed this wee story, I liked Jolie - her being a burlesque dancer helped - and I loved Hauk, it's so refreshing to have a leading male that's not drop-dead gorgeous.

Hauk is used to hiding from the public eye, he can do without the stares, so I think he's kind of freaked out by someone who's just met him not being bothered by his looks, not to mention the fact that he wants to get in her pants - that makes things a bit awkward!

Definitely a recommendation from me and I am very much looking forward to the next book in the series.