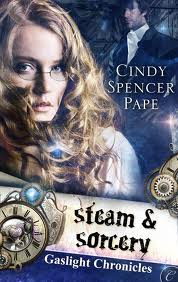 Sir Merrick Hadrian hunts monsters, both human and supernatural. A Knight of the Order of the Round Table, his use of magick and the technologies of steam power have made him both respected and feared. But his considerable skills are useless in the face of his greatest challenge, guardianship of five unusual children. At a loss, Merrick enlists the aid of a governess.

Miss Caroline Bristol is reluctant to work for a bachelor but she needs a position, and these former street children touch her heart. While she tends to break any mechanical device she touches, it never occurs to her that she might be something more than human. All she knows is that Merrick is the most dangerously attractive man she's ever met - and out of reach for a mere governess.

When conspiracy threatens to blur the distinction between humans and monsters, Caroline and Merrick must join forces, and the fate of humanity hinges upon their combined skills of steam and sorcery...

I'm not a huge fan of books set in years-gone-by but the vague steampunk feel to this one made it enjoyable. Cindy Spencer Pape wrote a great cast of characters and an awesome world full of clockwork machinery, vampyres and werewolves.

The only thing that bugged me about this book was at the very beginning. Merrick's weapon was like a sword but instead of being made of metal, it was made of wood. The author called it a sword-stick, for some reason that annoyed me. It seemed like a mouthful and I feel she could've just made up another word for it. But one tiny complaint (that's really just a minor annoyance on my part) does not ruin a great story.

Recommended for any supernatural, steampunk or romance fan.