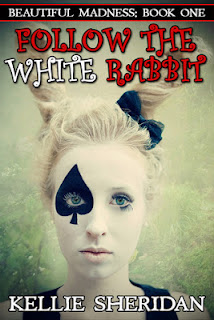 For centuries, Wonderland thrived as the domain of beautiful bedlam and unapologetic madness. It was a place like no other. All it took was one girl slipping in through the cracks of the universe to start chaos spiraling toward order. In the 150 years since Alice's visit, the realm has become tainted — almost normal. Rabbits in waistcoats and playing card minions are little more than creatures of myth, and Wonderland is literally falling to pieces.

For Gwen, Rose, and Lucky, Wonderland is home, and yet they know little of its former glory. When the Alice prophecy resurfaces, they'll have one chance to use Wonderland's own legends to bring a little mayhem back into their reality. For she who controls Alice controls the fate of Wonderland.

I really enjoyed this novella - very quick read, I started it and finished it on one leg of my commute to work (just under an hour and a half). I've always loved the story of Alice in Wonderland - what child didn't love the characters and the world as they were growing up.