Meeting His Match by Katee Robert 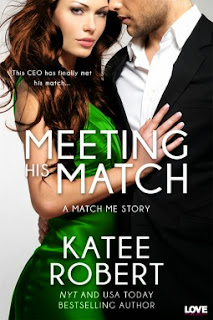 When New York matchmaker Addison St. Claire is tasked with matching her best friend's new brother-in-law, she almost refuses. But the sexy southern CEO turns out to be a challenge she can't resist, because if anyone needs to meet his soul mate, it's this man. And if matching him with someone else removes the temptation of being near him? Even better.

The last thing Caine McNeill needs is a matchmaker — especially a gorgeous redhead who spouts nonsense about soul mates, critiques what he drives and how he dresses, buys him a dog, and pesters him about a million little things he couldn't care less about. It's a crying shame he has to keep his hands off because chemistry like what's flaring between them ought to be explored. Thoroughly.

And so the battle begins. Addison is determined to stick to her plan of setting him up on dates with other women, and Caine is equally determined to ignore these women and seduce her.

Addison is a matchmaker that believes in soul mates, and she believes she's had and lost her one and only. Caine is a CEO that doesn't have time for other activities, including having a relationship but his sister-in-law feels he needs one so sets Addison on him. But there's attraction between Addison and Caine that Addison refuses to acknowledge which only makes Caine more determined to follow it through..

Caine and Addison are actually tied into the Wedding Dare series through Katee's book in that - Caine is Brock's brother and Regan's brother-in-law, and Addison is Regan's best friend. I liked Addison to a point - her unmoving devotion to someone only having one soul mate is annoying. Because despite her attraction to Caine, she refuses to believe there may be a future together for them. I liked Caine slightly more than Addison, he was willing to work to prove to her that there was something worth chasing between them.

I really like Katee as an author and have so far, I believe, read all her releases and will continue to do so as long as she keeps writing them.