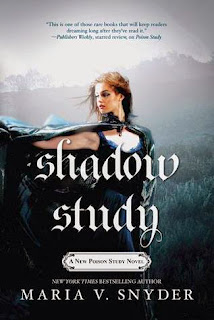 Snyder wowed readers with Poison Study, the unforgettable story of poison taster Yelena. Now she's back with a new tale of intrigue.

Once, only her own life hung in the balance.

Oddly enough, when Yelena was a poison taster, her life was simpler. But she'd survived to become a vital part of the balance of power between rival countries Ixia and Sitia. Now she uses her magic to keep the peace in both lands and protect her relationship with Valek.

Suddenly, though, they are beset on all sides by those vying for power through politics and intrigue. Valek's job - and his life - are in danger. As Yelena tries to uncover the scope of these plots, she faces a new challenge: her magic is blocked. She must keep that a secret - or her enemies will discover just how vulnerable she really is - while searching for who or what is responsible for neutralising her powers.

Yes, the days of tasting poisons were much simpler. And certainly not as dangerous,

It's been a long time since I've read about Yelena and Valek; and Snyder didn't let us fans down with this new book. Technically the start of a new series but also carrying on from the Study series, Valek and Yelena are still juggling their lives in separate countries with their relationship. All seems well until Yelena gets attacked on the way to meet Valek and loses her magic, she has to find out what happened to her magic when something else comes out of the woodwork to keep them both busy.

Anyone that's read either the Study or Glass trilogies will know that Snyder has created a huge world with plenty of interesting characters and even with the long break Valek and Yelena are just as exciting.

The fun thing about this book is that we get to read from Yelena, Valek and Janco's perspective. There's also an intriguing storyline with the Commander that I can't wait to see continued in the next book, and how Yelena and Valek handle the ending should be interesting.

Definitely recommended, especially if you're a fan of Yelena and Valek and I can't wait for the next book to come out.