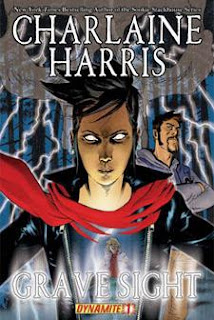 At the age of fifteen, Harper Connelly was struck by lightning, an event that gave her the ability to find the dead and see how they died. Since then, Harper's scratched out a living selling her services to anyone with a chequebook. It's not the best life, but it beats the alternative, at least until Harper and her brother Tolliver roll into Sarne, Arkansas and find themselves embroiled in a murder mystery!

Harper's power is completely unique and because of that not everyone trusts it or believes in it but they still hire her. I always wondered whether it was to try and debunk her or if they were always secretly wishing it to be true.

I've always enjoyed the Harper series and hope to read the rest in comic form as well. Although I am still disappointed that the series has come to an end, seemingly so Ms. Harris can focus more on the Sookie books.

If you're not a big reader of actual books then this is a great way to read the Harper series, it's a great series and well worth a look.