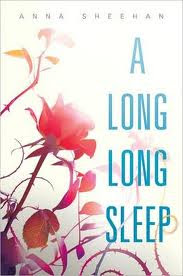 Rosalinda Fitzroy has been asleep for sixty-two years when she is woken by a kiss. Locked away in the chemically-induced slumber of a stasis tube in a forgotten sub-basement, sixteen-year-old Rose slept straight through the Dark Times that killed millions and utterly changed the world she knew. Now, her parents and her first love are long dead, and Rose — hailed upon her awakening as the long-lost heir to an interplanetary empire — is thrust alone into a future in which she is viewed as either a freak or a threat. Desperate to put the past behind her and adapt to her new world, Rose finds herself drawn to the boy who kissed her awake, hoping that he can help her to start fresh. But when a deadly danger jeopardizes her fragile new existence, Rose must face the ghosts of her past with open eyes — or be left without any future at all.

It should have been a short suspended-animation sleep. But this time Rose wakes up to find her past is long gone - and her future full of peril.

I absolutely loved the concept behind this story, like a futuristic and dark retelling of Sleeping Beauty with a twist. I don't think an exact year is ever given, although at one point I believe there is mention of 2087 and it seems like that was in the past.

I liked Rose, she was troubled and misunderstood by her parents who basically wanted a plaything and not a child. They had no qualms about putting her in stasis just because they were going on holiday or working away. Stasis is like a hyper sleep kind of deal, you go in and get chemically induced to sleep but while you're in there, you don't age or anything. So with Rose being put into stasis so often, she watched others around her grow up while she remained a child.

She awakes in the future and everyone she knew is dead. People believed she had died years ago and now that she's back, she has a lot to learn and a lot to do to try and assimilate into this new time.

I really hope there's more to follow and, judging by certain events in the book, there might just be. If the author hasn't started on a sequel yet, I think she should. I believe A Long, Long Sleep will be a hit with the YA crowd and could definitely do with becoming a series.