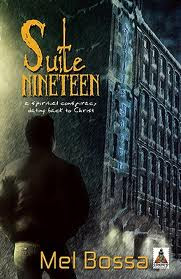 Drawn by the promise of change, young medium Ben Lebeau, moves to the big city, into the Shilts Manor — an old textile factory turned trendy loft space. There he meets seductive Lennox Van Kemp and his clan of Métis — guardians of the oldest lie. Ben is pulled into Van Kemp's emotional circle, finally sating his most secret desires.

Against Ven Kemp's warnings, Ben befriends his neighbor Ezra Collins — a scarred man who has taken a vow of celibacy. As Ben tries to get closer to Ezra and earn his trust, he also struggles to escape Van Kemp's psychological grip on him. The harder Ben falls for Ezra, the more he suffers from hallucinations and memory losses. Soon, the Manor's walls begin to close in on him and Ben must rely on his psychic abilities to survive the assault on his mind.

As Ben and Ezra unravel Van Kemp's plans, they expose a spiritual conspiracy dating back to Christ — a conspiracy that will shake their very world and restore their Faith in humanity.

I liked the sound of this book, but re-reading the blurb, I just noticed that it gives away the one and only thing that book had going for it - the reveal of what Van Kemp and Ezra are. To me that seems strange to give away that in the blurb when, if you read the book, the whole Métis thing isn't revealed until the end.

I tried to like this book, I really did. The story sounded interesting but the 3 main characters - Ben, Van Kemp and Ezra - are annoying! They all seem exaggerated way too much. Ben is whiny and annoying, Ezra is moody and annoying and Van Kemp is pushy and annoying. Not a good combination of leads. It also took me a while to read since I didn't want to read it when I was at home, I was basically only reading it on my lunch breaks at work and I just couldn't work up the .... want .... to pick it up at home.