I, Zombie by Nick Spalding 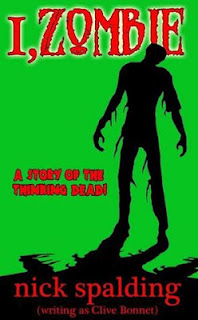 A story of the thinking dead!

"My name is Jim Monroe, and I am a zombie.
My natural life on this planet has ceased and I've been re-animated to stalk the world as a pale, hollow imitation of my former self.
I'm different from my undead brethren though... I'm a zombie with a brain.
This is the short, shocking story of how I came to be this way."

I, Zombie is a comedy horror short story from Nick Spalding (writing as Clive Bonnet) and is featured in his fantasy novel The Cornerstone. To find out more about Nick and buy his other books, visit his author's page at the link below.

Jim wakes up in the morgue and finds that everyone outside is also a zombie but, unlike him, they're all brainless and tend to just shamble along and eat other body parts. The book is basically Jim writing down his thoughts on being a zombie in the hopes that someone may find it in the future and realise that zombies aren't all brain dead dead.

This was another hilarious short read, again this one only took me one lunch hour to read but it was really funny. There are a fair few Laugh Out Loud moments which, for such a short story, seems a much bigger achievement.