The Stubborn Dead by Natasha Hoar 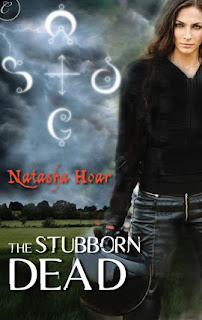 Rachel Miller thought her next job was a run-of-the-mill haunting. As a member of the Order of Rescue Mediums it's her duty to release trapped spirits from the earthly realm. But when called to client Sylvia Elkeles's house, she finds a wraith who doesn't act like he should.

The Order considers the wraith an extreme threat and Rachel may be forced to use a barbaric ritual to free him — a ritual that comes with a heavy personal price. If she fails to humanely release the wraith, she'll have her supernatural abilities bound.

When Janus Ostara — local supernatural mob boss — shows up demanding her attention, and Sylvia keeps secrets that may place Rachel in mortal danger, she doesn't need her abilities to know something darkly sinister is at play.

Between uncovering Sylvia's disturbing motives, and avoiding Janus, Rachel has enough on her hands without dealing with a wraith who may not realize he's supposed to be dead...

This is book 1 in the Lost Souls series and I really enjoyed it. As usual, Carina Press are bringing some really good authors into the light. Natasha Hoar's writing style and characters are enjoyable, she manages to make you keep turning pages. A sign of a good author for me, is when I don't want to put the book down, even thought I know I have to go to sleep since I'm working early the next morning. Natasha Hoar managed this.

Rachel is an intriguing character, as is her job, I'm looking forward to reading more of her. I had trouble with Janus, the name meant I kept picturing a woman, even after finding out he's a man. I'm hoping that we'll see more of Rachel and a certain someone in later books (spoiler, so I'm not naming names). The story flowed well and it's quite a quick read since it's not too long.