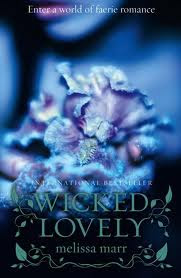 RULE 3: NEVER STARE AT INVISIBLE FAERIES
Aislinn has always seen faeries. Powerful and dangerous, they walk hidden in the mortal world.
RULE 2: NEVER SPEAK TO INVISIBLE FAERIES
One of them, a beautiful faery boy named Keenan, is trying to talk to her, asking questions Aislinn is afraid to answer.
RULE 1: DON'T EVER ATTRACT THEIR ATTENTION
Now it's too late, Keenan is the Summer King and is determined that Aislinn will become the Summer Queen at any cost. Without her, summer itself will perish ...

Aislinn (I'm assuming it's pronounced Ash-lynn?) has always seen faeries, like her mother and grandmother before her, but she's always had the rules drummed into her. Most important is to NOT let the faeries know she has the "sight", they will kill any mortal that can see them, so Ash has always kept it hidden by not reacting to them and getting out of their way when they show up. It becomes harder to do when a faery approaches her and then even joins her school, turn out he's the summer king and is looking for his queen to fully bring about his powers and stop the winter from killing all the summer fey - he thinks Ash is that queen but she wants nothing to do with him or the faery world that she's spent her whole life ignoring.

First off, that cover ....... just plain gorgeous. It's always called out to me on bookshelves but I've just never picked it up 'cos I wasn't sure about the story or the author (never read anything by Marr before). But it's definitely a cover that makes you look, makes you pick up and "ooh" & "aah" at the shininess.

Sadly, the story didn't excite me as much as the cover. I didn't like Keenan or Ash as main characters, Keenan was very spoiled brat-ish and a tad pushy for my liking and Ash .... I don't know what it was about Ash but there was just something I didn't like about her. I much preferred Seth and Donia. That said, I still like the actual storyline and the faery folklore as well as the imagery of the winter queen and winter girl - I'd quite like to see the image in my head brought to life on paper but I can't draw. I think I'll still pick up the next book since it seems to be different characters so I might like it more?