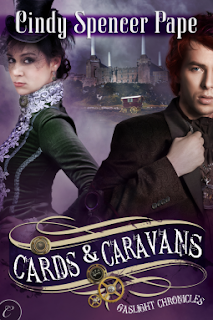 Belinda Danvers isn't a witch. But that won't stop them burning her at the stake ...

Connor McKay can tell at a glance that Belinda's magickal powers are minimal at best. She can't be guilty of murdering village children. There's something suspicious about her arrest and lightning-quick sentence. Unfortunately, telling anyone how he knows would mean revealing his own powers. He's been sent by the Order of the Round Table to help and he can't just let her die.

Escaping from jail and running from vindictive villagers in her grandfather's steam-powered caravan is more excitement than Belinda's had in years. And despite the danger — or maybe because of it — she loves the time spent with her sexy rescuer. But there's more to his magick than he's letting on ...

There's something going on that's bigger than the two of them. It's time for good to make a stand.

Belinda is tried (very quickly) and found guilty of witchcraft, to be burned at the stake the following day. Luckily, Belinda's uncle knows people in the Order and contact Connor to find Belinda and help her. He breaks her out of comes up with a plan to help her - and they both fall in love with each other in the process of trying to bring down the group that are responsible for Belinda's trial.

So, I said in my review of Moonlight & Mechanicals that I thought I saw hints of who the next book was about and, boy was I ...... wrong! So totally wrong, but again there are more hints in this book about that specific couple so I'm still hoping for a book about them in the future. I liked this couple but Wink and Liam are still my favourite of the bunch (that being said, I haven't read Kilts & Krakens yet).

I wasn't entirely sure about this series at the beginning but I find myself liking it more with each book and I get so excited when I see the titles on Netgalley 'cos it means I get tot read it before it's released. I'll be reading the book I missed out next so we'll see how I feel about that couple.