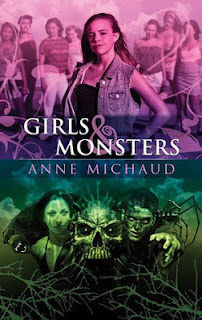 Death Song: Liz is in love with Jo, but the monster of the lake has other plans for them.

Black Dog: Scarlet is engaged in a struggle for her sanity, but according to the voice in her head, she may be too late.

A Blue Story: When Katherine's beloved dog goes missing, she fears her strange new neighbour might be involved.

Dust Bunnies: Christiane faces her childhood arachnophobia and ends up confronting even greater fears in this test of sisterhood.

We Left at Night: Brooke and her family must abandon their home and their lives to make it out of a disease-plagued town overrun by zombies.

Girls & Monsters is for everyone who has ever been brave enough to confront their childhood fears...and lived to tell about it.

I figure I'll do a wee review of each short story.

Death Song: Killer mermaid living in a small town's lake, she takes a tourist every year - they're bodies don't appear for a month. But then she changes her style and starts taking residents - the residents have always been out of bounds, and then she goes for Jo and Liz fights back.
I enjoyed this one. Mermaids are usually painted as "Ariel" types so I like it when authors change it up and make them evil and bloodthirsty.

Black Dog: Scarlet goes to London to try and be a new person, but the voice in her head persists in its annoying her and finally convinces her that she is actually insane.
Another good one, I liked the hints at Scarlet's past rather than a flat out long flashback. One minor thing was the author says at one point the drinking age in UK is 16, it's 18 - no bearing on the story, it just bugged me.

A Blue Story: Katherine takes a job at a pet shop then discovers how many local pets are missing - soon her dog, Sweet Sally, joins the ranks. She hunts for Sally with her new boss only to discover Sally was closer than she thought.
One of the "meh" stories of the book. I found this one a bit boring and didn't really like the main character much.

Dust Bunnies: Christiane has to go with her sister to clear out her grandmother's old house only to be confronted with her childhood monster, but she soon realises the monster might not be a monster after all.
This one hit more to home 'cos I always hated spiders (still do, a little). I liked the setting for this one and the fact that there was really a monster under her bed when she was a kid, but the best bit is when she finds out the spider's origins.

We Left At Night: Brooke sees some strange men in her garden, strange things have been happening for a while now and then the army show up at her door and tell her and her family to evacuate within the hour.
I liked the whole family-sticking-together theme in this one, also the immunity to the zombie-ism. This one has the potential to carry on given the ending.
Posted by Julie-Anne at 22:24