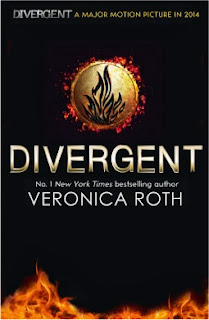 In the world of Divergent, society is divided into five factions – Candor (the honest), Abnegation (the selfless), Dauntless (the brave), Amity (the peaceful) and Erudite (the intelligent). Every year, all sixteen-year-olds must select the faction to which they will devote the rest of their lives. For Beatrice Prior, the decision is between staying with her family and being who she really is. Her choice shocks everyone, including herself.

During the initiation that follows, Tris and her fellow initiates undergo extreme physical tests of endurance and intense psychological simulations, some with devastating consequences. As initiation transforms them, Tris must determine who her friends really are – and where the boy who seems to both threaten and protect her fits into the life she's chosen.

But Tris also has a secret, kept hidden because she's been warned it can mean death. As unrest and growing conflict threaten to unravel her seemingly perfect society, Tris learns that this secret might save those she loves ... or it might destroy her.

Tris just turned sixteen, this means she must sit a test to help her make the biggest decision of her life - what faction she wants to belong to. Her test doesn't give her a definite answer, instead it gives her a huge secret - a secret that, if discovered, could mean her death. During her faction initiation period, she both gains and loses friends as she finds out a lot about herself.

My friend has been telling me to read this series for ages now but, for some reason I've never followed her advice. With the movie coming out this years, I felt it was time to read it since I prefer to read the books first.

I'm glad I read it 'cos I really liked it. There are differences between the factions and sometimes someone that's growing up might not feel like they belong in that faction, that's what the choosing ceremony is for. Unfortunately, Tris has trouble making the decision 'cos she feels like she'd be hurting her family if she chooses a different faction.

I liked Tris' character and her struggles to find out about herself, what she is and where she belongs. Roth's dystopian world is scary and weird but also kinda makes sense - in a way. I'm definitely going to read the rest of the series now and I'm almost looking forward to the movie (I say almost 'cos book-to-movie usually disappoints me).