In Bed With Mr Wrong by Katee Robert 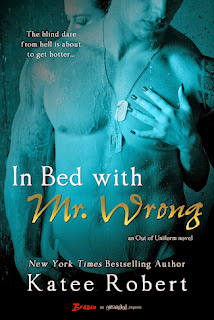 The blind date from hell is about to get hotter...

Brianne Nave is never doing her friends a favour again. When they begged her to go on a blind date, she didn't expect someone so perfectly gorgeous. She's a mousy librarian — totally not in this man's league. And judging by his odd reaction when she opens the door, he knows it, too.

Air Force Pararescuer Ryan Flannery avoids his hometown at all costs. He's not thrilled about the date until he's shocked silent by the prickly little librarian's sweet curves and kissable lips ... and her smart mouth. But then an argument leads to a kiss that spirals out of control. How can two people have so little chemistry outside the bedroom when they fit together so perfectly in it?

When their friends strand them in a cabin to "work things out", Bri's not sure whether to kill him or put the industrial-sized box of condoms they find to use. Bottom line — Ryan's career military and hates the tiny town she loves. He'll leave, just like everyone else in her life. And if she's foolish enough to give him her heart, he'll take it with him.

Bri has been set up on a blind date with Ryan by Ryan's brother - who happens to be one of her closest friends. There's instant hatred between the two of them but they still go on the date, and when they kiss at the end of the date sparks fly. When the same friends strand them at a cabin to work things out, the sparks ignite big time. But can they get past their bad start to pursue a relationship?

I really like Robert's writing and have read all her Brazen books so far so when she offered and ARC for review, I jumped at the chance. And this story doesn't disappoint, it really continues on with what I've come to know and love about Katee Robert's writing.

I liked Ryan from the start but I really didn't like Bri - she was exceptionally defensive and rude from the start. And even after we find out the reasoning behind why she's like that ... I still didn't like her. I'm hoping she won't be in further books, that they'll follow different couples each time. Although I have this strong suspicion that Ryan's brother may be the lead in his own book at some point - only time will tell if I'm right.

Labels: book review, in bed with mr wrong, katee robert, out of uniform