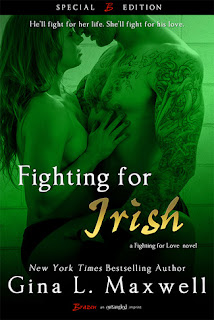 Kat MacGregor has forty-eight hours to make good on the debt her ex-boyfriend owes a crime boss. Unfortunately, the measly tips she makes waitressing are barely enough for her to live on, much less cover the twenty-thousand needed to keep her breathing. With time running out, Kat's forced to accept help from the only man who's ever made her feel fire rather than fear.

When he learns a friend's sister is in trouble, former Boston MMA fighter Aiden "Irish" O'Brien heads to Louisiana to offer himself up as collateral to keep her safe. But to satisfy the debt, he has to do the one thing he swore he'd never do again: fight. With more than just money on the line, will Irish have what it takes to not only reclaim the man he once was, but become the man he needs to be for the woman he can't live without?

Aiden owes his friend Jax a favour, that favour is to find and keep an eye on Nessie's sister. Aiden doesn't bank on finding her sexy as hell and slowly falling for her. Kat has been hiding out under an alias to try and keep her boyfriend's bad past at bay, she puts her trust in Aiden - does he deserve it?

We first kinda-almost-but-not-quite met Kat in Rules of Entanglement, she's Nessie's sister that ends up in hospital. I liked Kat, she has a past and she's broken which means she needs fixed. I like when at least one of the main characters has some meat to their backstory. I liked Aiden enough but not massively so, I still prefer Jax but I'd also take Aiden over Reid.

In my opinion, this one has the bet actual story out of the series. I think maybe because of Kat's past? I don't know what it was but it didn't feel like I was just reading sex in this book and because of that I will proclaim it to be my favourite so far.

Saying that, it also had the trope that I'm getting a bit tired of reading - A and B fall in love only to have A find out something about B that threatens to rip them apart until A realises how much they love B and can't live without them. So many books are using that that I really enjoy it when a book doesn't have that in it. It wasn't enough to damage the story for me but it makes it a bit predictable.