Whip It by Shauna Cross 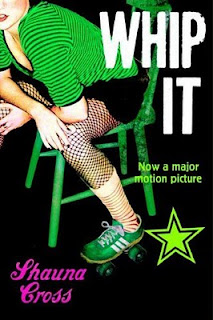 Meet Bliss Cavendar, an indie-rock-loving misfit stuck in the tiny town of Bodeen, Texas. Her pageant-addicted mother expects her to compete for the coveted Miss Bluebonnet crown, but Bliss would rather feast on roaches than be subjected to such rhinestone tyranny.
Bliss's escape? Roller Derby.
When she discovers a league in nearby Austin, Bliss embarks on an epic journey full of hilarious tattooed girls, delicious boys in bands, and a few not-so-awesome realities even the most hard-core derby chick has to learn.

My friend recommended this book because she knows I loved the movie. I normally like to hold off on watching a book-to-film adaptation until after I've read the book but, in this case, I didn't know there was a book until my friend told me about it.

What's not to love about this book? Roller derby. Cool chicks in funky outfits. And awesome writing.

Bliss finds out about Roller Derby by chance and drags her friend, Pash, along. She instantly falls in love with the sport and decides to try out. What follows is a coming of age story about first loves, first kisses and contact sport.

I love Bliss. She's spunky and smart. Pash is a great friend but can be a tad annoying at times. The reader instantly has the same feelings as Bliss towards her mother, she's annoying and trying to relive her youth through her kids.

The movie is actually fairly true to the book. Any changes are small and kind of inconsequential. My main problem was how short this book was, it took me no time at all to finish it. I'd actually love to read more about Bliss and the Roller Derby league.