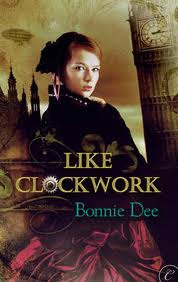 Victoria's work with automatons has gained her renown and changed the face of London. But her concern that the clockworks are taking too many jobs away from humans, creating social unrest, is ignored. Given the ugly mood of the underclass, she fears more outbreaks of violence similar to the murder spree of the notorious Southwark Slasher.

Dash, unemployed thanks to the clockworks, has pledged fealty to The Brotherhood, a group determined to bring about the downfall of the automatons by any means necessary. His plan to kidnap Victoria goes awry when the unorthodox scientist pledges her assistance to their cause.

Despite their opposite social classes, a bond grows between them, and Victoria begins to feel emotions she never expected for the passionate Dash. But when the Slasher strikes close to home, Dash and Victoria realize that the boundaries of polite society are far from the only threat to their happiness...

This was a short but sweet read, also a very quick read but a very good story was told. It's set in old London but has a steampunk-ish feel to it with the whole automaton story. I think the author did a good job with the time period and the whole "slasher" storyline had a Jack The Ripper feel to it.

I kind-of-but-not-quite believed the relationship between Victoria and Dash. It seemed somehow wrong for the period the story was set on, although there was a lot of "this-isn't-right" thoughts and such so it kind of sorted but I still wasn't 100% convinced on it.

However, this didn't ruin the story for me or anything. I still liked the story and the characters, and I'd quite like it to continue and perhaps become a series.