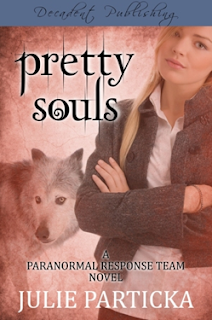 Elle hasn’t been afraid of the things that go bump in the night since she became a werewolf. She'd happily give up her inner monster to get her family back though. Hell, she'd give up the beast for nothing. Of course her foster sister doesn't get it. After all, she doesn't battle with her own darker half, but vampire blood can do that to a person.

Their nightly patrols have become more habit than necessity — until a demon spawn comes to town, ripping souls from strangers, enemies, and friends alike. When it threatens her foster mom, Elle's peaceful life is shattered, but she's not going to give up without a fight. Fighting the beast for control at the same time is more than she can handle though. Armed with more attitude than experience, Elle and her sister have to track down the demon spawn before it collects enough souls to fulfill its birthright and open a doorway to hell.

For the first time in years, Elle is scared. She's willing to lose herself in the beast if that's what it takes, but saving the world could cost her soul.

You may remember Julie from her interview on here last month, Pretty Souls is finally (nearly) here.

So you want to read the review of it, right?

It's awesome! Buy it and read it, you won't regret it.


OK, so if you've scrolled down here you're obviously expecting more than that, what is wrong with you?? You can't just live with "It's awesome"? Seriously, it is! But fine, if you insist on more ....

The story was well told and very well paced, I didn't want to put it down (damn work taking me away from my reading time). I loved Elle and Cass (OK, with Cass, it took me a couple chapters but it happened eventually) and I loved the fact that they're desperate to keep their life as normal as they can so as to fit in and not lose their foster parents. So Elle even tries to stop herself eating as much as she needs with her high metabolism just so she seems like a normal teenager.

I'm hoping (judging by the cliffhanger) that there is going to be another book and hopefully it'll be very soon! *fingers crossed*

This is a great debut novel from Julie Particka and it should be a big hit with the YA audience. I, for one, cannot wait to have an actual copy in my hand.