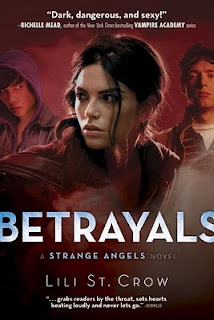 Dru Anderson's not afraid of the dark. But she should be.

Poor Dru. Her parents are long gone. Her best friend Graves has been bitten by a werwulf. And she's just learned that the blood flowing through her veins isn't entirely human. Now Dru's strange and handsome saviour, Christophe, has her hidden away at a secret Schola for djamphir and wulfen teens. Trouble is, she's the only girl in the place. The really bad news? Dru's killer instinct says that one of them wants her dead.

With all eyes on her, discovering a traitor within the Order could mean a lot more than social suicide...

I said in my review for Strange Angels that I thought I had this book on my shelf, turned out I didn't! So I had to buy it, hence why the follow up review is so long after the first.

As I typed in the blurb above, it struck me just how misleading blurbs can be. Dru's parents aren't "long gone", her mum is but her dad only died in the 1st book which takes place just a few weeks before this one so long "long gone" is a bit much. Also it says "her best friend Graves has been bitten by a werwulf", it was that actual event which led to him becoming her best friend, they'd only just met before that happened. So again, a bit misleading.

But anyway, onto the story. I'm still loving Graves, don't trust Christophe as far as I could throw (which wouldn't be very far). I liked reading the way djamphir and werwulf interact, all we've seen of it so far is between Christophe and Graves and that could just have been personal hatred. It was interesting to find out how special everyone thinks Dru is, although Dru obviously doesn't like being treated as such.

A nice addition to the series and, again, I have to wait to read the next one as I don't have it in my possession ....... yet.