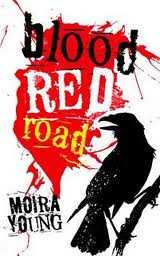 I ain't afeared of nuthin.

When Saba's brother is stolen, red rage fills her soul.

She races across the cruel dustlands to find him.

Saba can trust no one. Even the boy who saves her life.

She must silence her heart to survive.

This book could be described as dystopian. It's set in a future world where civilisation, as we know it, has ended and people are struggling to live and survive. Rivers and lakes have dried up and food is scarce in some places. The world Moira Young writes is huge and very detailed, it reminds me a bit of Mad Max as well. Don't ask me why, I think it's the scenes in dry, desert-like places.

I was worried at the beginning, that I wouldn't like this book. I started reading and the language put me off, it's written the way (I guess) that the people talk and there's no speech marks to denote when someone's speaking. But I got used to it eventually and ended up loving it.

The characters are well written and I love Saba and her stubborn hot-headed-ness, I also love that she grows and changes as she's forced to live a life she doesn't want to. As I already said, the world is great. It really does make me think of Mad Max, maybe it's the scenes or maybe it's the idea of marauders hiding out and waiting to rob people.

Whatever it is, I recommend this book. Very enjoyable and there's a sequel due out in 2012 .... that's only a year away, I can wait that long, right?