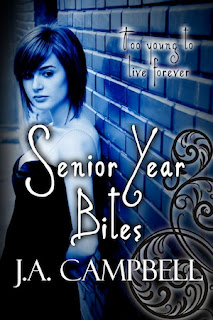 Senior year is supposed to be fun: boys, dances and graduation.

It's significantly harder to enjoy it when you’re dead.

Truth or Dare is supposed to be fun too. It’s not even close to dangerous, so playing at Steph's house didn't seem like a bad idea. My dare? Spend the rest of the night in the graveyard next to her house. It was only a couple of hours until false dawn, my proscribed return time, so no big deal right? Right.

I survived the attack, but it took me a few days to figure out what was going on. I mean vampires might stalk pop culture, but they're just myths. Yeah. Not so much.

School is a lot more difficult when you're a nocturnal creature of the night. I was managing, but I couldn't keep it hidden from my friends for long. After I managed to accidentally save one of our cheerleaders from her drunk and ill-intentioned boyfriend. Steph decided that we should be cool, like superheroes, and fight crime.

Only I’m a vampire, not a hero, and we live in a sleepy New England town, so crime's a little harder to come by. At least it is until a serial killer moves into the area. He’s got the authorities stumped, but then again, the cops don't have a teenage, blood-sucking, non-hero on their team.

I read the description of this book ages ago and have been impatiently waiting on the release, so I'm glad it's finally out and I was able to get my grubby little hands on it (figuratively since it's an E-Book). I really liked Meg and her friends and was pleasantly surprised by the ending.

One little thing that irked me (and it really was a tiny thing) was the way the characters "spoke". They don't use contractions when they speak. Since I tend to "act" the parts out in my head, this was hugely noticeable to me and started grating a little, the further into the story I got. But again, I think this is purely a personal thing for me, I can see authors writing like this in the actual story but when it comes to the actual "speaking" parts? I don't know anyone that speaks like that so it kind of felt like padding.

Other than that small thing, I loved the book. The story was really well told and, as I stated, J.A. Campbell has a way of leading you down one path then suddenly opening another door for you. Very well written and I definitely hope to read more.