Born at Midnight by C.C. Hunter 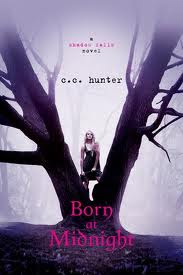 One night Kylie Galen finds herself at the wrong party, with the wrong people, and it changes her life forever. Her mother ships her off to Shadow Falls - a camp for troubled teens - and within hours of arriving, it becomes painfully clear that her fellow campers aren't just "troubled." Here at Shadow Falls, vampires, werewolves, shapeshifters, witches, and fairies train side by side, learning to harness their powers, control their magic, and live in the normal world.
Kylie's never felt normal, but surely she doesn't belong here with a bunch of paranormal freaks, either. Or does she? They insist Kylie is one of them and that she was brought here for a reason. As if life wasn't complicated enough, enter Derek and Lucas. Derek's a half Fae who's determined to be her boyfriend, and Lucas is a smokin' hot werewolf with whom Kylie shares a secret past. Derek and Lucas couldn't be more different, but they both have a powerful hold on her heart.
Even though Kylie feels deeply uncertain about everything, one thing is becoming painfully clear: Shadow Falls is exactly where she belongs ....

So I heard of this book ages ago when I heard of the free e-novella Turned at Dark then I won Born at Midnight in a contest from a blog, which I would link to but I can't remember who they are, sorry. Unfortunately I also just discovered I can't read Turned at Dark because it's not available in my country ~ bummer! Sucky geographical limits.

Anyway, I started this book the other day and I absolutely loved it. Kylie is a nice YA lead and Derek and Lucas are your typical YA triangle material, completely different and both hot so it makes it difficult to choose.

The story is good, paced well and doesn't really have any boring bits in it. I liked the idea of Shadow Falls, a camp for supernatural teens just coming into their powers. And I loved Kylie's room mates, Della and Miranda, a newly turned vampire and a dyslexic witch. Kylie's struggle with finding out who she is and why she's at the camp is very well told. You really get into her head and she fluctuates between wanting to believe she is something and hoping that she's not (even though that would mean she's actually very ill).

All in all, a very good short read and a must for all fans of the genre. I'm going to try and get my greedy little hands on Turned at Dark and can't wait to read the next book, Awake at Dawn.