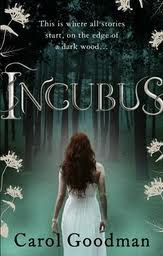 In a town built on magic, be careful what you dream ...

She learns that her home - a Victorian cottage at the edge of a wood - is supposedly haunted. And then her new - and rather strange - colleagues tell her a local legend about an incubus demon with a human past who was enchanted by a fairy queen ...

It took me a loooong time to get into this book. It's really slow going and nothing really exciting happens until near the end. And even then, it's not really that exciting.

Huge periods of time pass between chapters and breaks and they're never really discussed. The story itself, is vaguely interesting but not overly so. And the characters aren't enough to hold your interest. Callie isn't strong enough for a lead character, in my opinion. She's sort of boring, a bit self obsessed and not very interesting.

This isn't really a book I'd recommend to someone, I bought it as an impulse buy but I wish I'd read some reviews first.