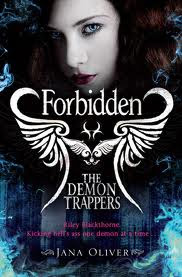 Hell has a plan for Riley Blackthorne ...

Riley's beginning to think being a demon trapper isn't all it's cracked up to be. Her dad's been stolen by a necromancer, her boyfriend's gone all weird and she's getting warm and fuzzy feelings for someone who's got more secrets than the CIA. It's tempting to give it all up and try to be normal, but that's not an option with Hell watching her every move.

One mistake will cost her everything - and that's the one she's about to make ...

Read my review of the first book in this series, The Demon Trappers: Forsaken.

I absolutely love Riley Blackthorne and all the other main characters in this series. Despite the fact that she traps demons for a job, she's very down to earth. Beck is like the older brother Riley doesn't want but, of course they both have feelings for one another ~ I'm holding onto my hopes that they'll end up together.

The big fight at the end of the first book is the focus in this one, everyone's trying to figure out how it happened and what Riley's dad had to do with it. Meanwhile Riley has her own little investigation going with the holy water, and her boyfriend is injured and acting like a complete douche.

*****SPOILER***** I'm glad that things are over between Simon and Riley, I never liked him from the beginning. Too goody goody, Beck's much better suited for her.

One thing that irked me in this book was the simple little editing mistakes that were obviously missed. It's a small thing but it's something I always notice and it bugs me. Thankfully, in a book like Forsaken, the story and characters are strong enough to make me push the mistakes to the back of my mind so I can continue reading.