The High Priestess by Katee Robert 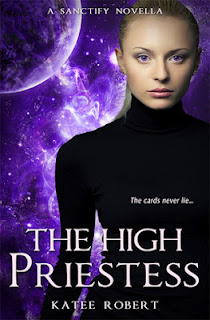 Marianna Zain is in trouble. The handsome stranger she just kissed? He's a member of the most terrifying hate-group in the universe. Even after he takes her captive, Marianna can't shake her initial instincts that he's a man of worth ... and her only chance at escaping death.

One of Sanctify's most decorated lieutenants, Gerard Leoni thought he had everything figured out. But then he crosses paths with a Diviner, the most despised of the alien races, and is honor-bound to bring her in. One night with Marianna makes him question everything he knows.

As the day of her scheduled execution draws near, Marianna forms a plan. She's going to seduce Gerard — a task that would be simpler if she weren't being seduced as well. But Sanctify doesn't take kindly to their people cavorting with aliens, and instead of finding a savior, Marianna may be dragging Gerald to his death alongside her ...

I hadn't read anything by Katee Robert but she's a friend's friend, a friend who's taste in books I trust, so I thought I'd give the sanctify prequel a bash. I really enjoyed it.

Dammit, you guys are so freaking needy with the reviews! Fine.

The characters of Marianna and Gerard (who's name I pronounced like Gerard Butler, not the American way since that sounds weird coming out of my mouth) are the ultimate enemies. Gerard has been raised to follow Sanctify beliefs, all aliens are bad and must be killed (in a very nasty way) and Marianna is the worst of all, she's a diviner, an abomination in the eyes of Sanctify. They meet in a bar and there's instant attraction, and then Gerard realises what she is and is bound to take her in. Only he doesn't want to, he wants to have smexy-sex with her (let's be honest, so do we :D ), Gerard's faith is rocked when he hears of proof of her powers and he must save her.

I liked the world that Robert has created and she writes some compelling characters. This is really just a prequel novella so it's very short, which makes it a very quick, fun read. Definitely worth a gander, it costs less than two quid.