Never To Sleep by Rachel Vincent 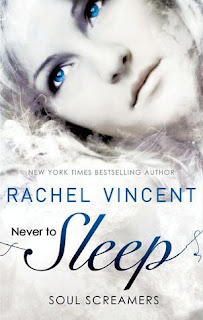 Sophie Cavanaugh is not going to let her freak of a cousin's strange psychotic condition ruin high school for them both. Not after all the work she's put into cultivating the right look, and friends, and reputation.

But then, Sophie sees something so frightening she lets out a blood-curdling scream - and finds herself stuck in a bizarre parallel world where nothing is safe and deadly creatures lurk just out of sight, waiting for her to close her eyes and sleep ... forever.

Could this world be real? Or does insanity run in the family ... ?

This novella is FINALLY available in the UK. I've been wanting to read the Soul Screamers novellas since Reaper came out (which, by the way, is not available yet over here even though it was out before Never to Sleep).

I really enjoyed this one, it was fun getting into Sophie's head cause all we've ever had so far is Kaylee's take on her spoiled cousin. Although the first part of the novella stands to only strengthen those traits.

Sophie gets transported to the Netherworld with Luca (new guy) and has no idea where she is or why she got there, luckily Luca knows (the why is explained in the novella and hopefully further explained in the next novel) and guides her in how to stay alive.

It's set at the same time as If I Die but, apart from Kaylee and Tod's PDA scene, you don't get any of the storyline. One of my favourite lines is when Sophie is so sure that Kaylee would never be able to handle what she saw in the Netherworld since she's not stable enough. I snorted at that part.