The Ravenous Dead by Natasha Hoar 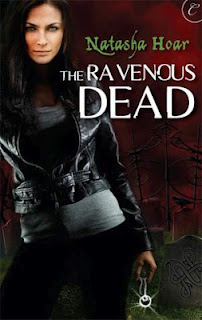 This time the dead are hungry...

Rachel Miller doesn't just see dead people, she rescues them. As a member of The Order of Rescue Mediums, she spends most of her time helping stubborn spirits move on from the world. But after she learns the details of three brutal murders, she knows the culprit can only be a reaper, an undead monster that relentlessly stalks its victims to feed on their souls.

A reaper once consumed the soul of Rachel's mentor as she watched frozen in fear. Now, Rachel is in the role of teacher to Kit Elkeles, a rodach just learning to control his wraithlike powers. After Kit and Rachel rescue a half-vampire, they work to protect him while searching for a way to stop the reaper. But when Rachel realises who the monster is really after - and just what kind of dark magic she'll need to stop it - will she be able to do what is necessary before it devours one of her friends ... or even herself?

Since I really enjoyed The Stubborn Dead, I jumped at the chance to read this when I saw it on Netgalley, and I wasn't disappointed. Hoar picks up the storyline and, happily, the "certain someone" I spoke about in the 1st review is back in the 2nd.

Rachel has taken on full responsibility for training Kit and he has moved in with her (Woohoo! Possible sexy times ahoy!), she hears about 3 cases of very similar supernatural deaths and knows it's a reaper. Unfortunately she's had a run in with a reaper before and doesn't entirely feel confident in handling them. But this one isn't the one she's dealt with, it's unusual in it's hunger patterns, they catch it mid feed and save the dude he's eating, he then joins them in the hunt. After another run in, the reaper sets its sights on Kit (NOOOOOO, not Kit! I loves him!).

Excellent addition to this series, I loved the familiarity between Rachel and Kit and the growth of their relationship. I'm really looking forward to the next book.