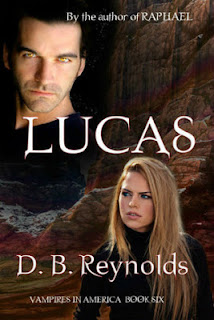 Lucas Donlon is a Vampire Lord, one of the most powerful vampires in North America and beyond. Charming and irreverent to his friends and lovers, he enjoys everything about his life as a vampire. But when a neighbouring vampire lord declares war, he soon discovers that Lucas is as every bit as lethal as he is charming.

Kathryn Hunter doesn't care about powerful vampires or their wars. Her baby brother is missing and she will do anything to find him, even if it means going against both her FBI bosses and the local vampire lord. But Lucas Donlon has other plans for the lovely FBI agent who's landed on his doorstep.

Waging war against their enemies and each other, Lucas and Kathryn will risk everything to keep the most deadly vampire war in hundreds of years from engulfing every vampire, and human, in North America.

Lucas is the new Lord that was introduced in one of D.B. Reynolds shorts (Right now, I cannot remember which one, sorry!) as Raphael's child, and the story lit upon the fact that he was about to face some troubles with another Lord. Kathryn is looking for her brother, she finds a link between her brother and Lucas and so meets with him - sparks fly. Kathryn feels guilty about her growing feelings for Lucas while her brother is missing - so she denies them.

This is the 6th book in the Vampires in America series and it still grabs me with every page. Duncan will ALWAYS be my favourite Lord but I think I just found my 2nd ..... Lucas is all alpha male and I love it! Alpha males do it for me - I love them and D.B. writes some of the best alpha vampires that I've read.

She also writes some really likeable leading females who normally tend to balk at the alpha male thing and try to fight their attractions - and Kathryn is no different. Although she's got her reasons for fighting but she's also got problems with admitting her love for Lucas.

I adore D.B.s writing style and her Vampires in America books is definitely one of my favourites. Highly recommended to any vampire fan - these are no wimpy vamps, they're vamps to be scared off ..... and attracted to!