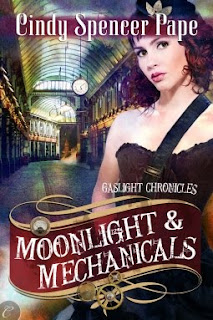 Engineer Winifred "Wink" Hadrian has been in love with Inspector Liam McCullough for years, but is beginning to lose hope when he swears to be a lifelong bachelor. Faced with a proposal from a Knight of the Round Table and one of her closest friends, Wink reluctantly agrees to consider him instead.

Because of his dark werewolf past, Liam tries to keep his distance, but can't say no when Wink asks him to help find her friend's missing son. They soon discover that London's poorest are disappearing at an alarming rate, after encounters with mysterious "mechanical" men. Even more alarming is the connection the missing people may have with a conspiracy against the Queen.

Fighting against time - and their escalating feelings for each other - Wink and Liam must work together to find the missing people and save the monarchy before it's too late ...

Wink is in love with Liam, Liam is in love with Wink but he proceeds to try and set her up with another man since he thinks his werewolf side makes him an unsuitable partner for her. While Wink is trying to let said man down gently while also trying to get Liam to really "see" her and accept that they belong together, she stumbles upon a case where lots of people and dogs are going missing. Liam is being kept busy with a case of anti-royalists - turns out both cases are related. And when Wink and Liam almost lose one another, Liam finally mans up and admits his feelings for her.

Wink was introduced in the 1st Gaslight Chronicles book, Steam and Sorcery, as one of the 5 children that Kerrick takes in. She had an affinity for working with electrics and she's now got a job with the Knights - this is a more likeable heroine for me than the previous ones. Liam is also my favourite hero of the bunch - possibly it's the werewolf makes him more manly or he's just not as much a wuss as the previous guys, who knows?

Whatever the reason for my liking these 2 more, it has made me want to read more of this series where Photographs and Phantoms kind of got me down. I do like the world that Pape has created and if she continues on with this type of character, I'll continue to like the series. I think I also caught some small hints about who the next book will be about .... only time will tell if I'm right on that.