Children of No One by Nicole Cushing 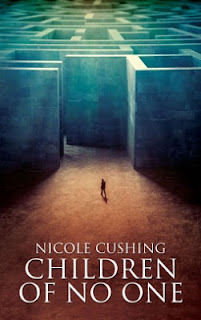 
For Thomas Krieg, Nowhere is a miles-long, pitch-black underground maze in which he's imprisoned dozens of boys for the past ten years - all in the name of art.


For two brothers, Nowhere is the only place they clearly remember living. A world unto itself, in which they must stay alert to stay alive. A world from which the only escape is death.


But for an English occultist known only as Mr. No One, Nowhere is much more...and much less: the perfect place in which to perform a ritual to unleash the grandest of eldritch deities, the God of Nothingness, the Great Dark Mouth.

Krieg is an artist who has made a massive underground labyrinth in which he has trapped several young boys. They have been raised in this maze and believe in angels, the angels feed them, the angels tell them when they deliver the food and ring a bell to let them know where the food is but the walls of the labyrinth move daily so getting to the food isn't as easy as it seems. The whole thing is made as an art-piece.

This (very) short story is extremely creepy and disturbing but also very moreish. I loved the whole psychological side of it - when told from the boys' POV, it is scary and weird but when told from the artist or observer POV, they make it all seem so normal. Which really just serves to make it even creepier.

Advertised as a novella, I feel it's more short story. I read it on my to-work commute so not a lot of reading at all, but what was there was BRILLIANT.


So I can't find this on any bookselling website that I frequent but here is a link that'll take you to the Publisher website - Children of No One
Posted by Julie-Anne at 22:13

Labels: book review, children of no one, nicole cushing