How Beauty Saved The Beast by Jax Garren 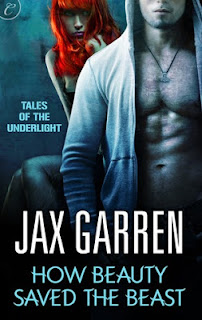 Jolie Benoit left her old life behind to become an agent of the Underlight. Training under Sergeant Wesley Haukon, she's honing her combat skills, all the while coping with the intense sexual attraction she feels for Hauk. She keeps their friendship casual, but when his high school sweetheart transfers into their division, Jolie finds herself grappling with jealousy.

The Underlight gave Hauk a purpose, but he can't escape his past completely. The physical and emotional scars from the fire that killed seven fellow Army Rangers will mark him forever. Jolie sends his protective instincts into overdrive, but he's convinced he'll never be worthy of her love.

Hauk is determined to keep Jolie from harm. But when the Order of Ananke ambushes them with a new weapon that neutralises Hauk, making him vulnerable, it's Jolie who must tap into her hidden strengths to rescue him — or risk losing him forever ...

Hauk and Jolie are getting closer ... as friends, Hauk's training Jolie for when she goes out on missions with the Underlight. They both like each other but refuse to admit it or believe the other one feels the same way then Hauk's ex comes onto the scene and ruins everything. They discover the Order of Ananke has a secret that stops Hauk's rages in their tracks ... but they don't know why (or how) they have it. Or why they've been watching Hauk and why they want him ...

I really enjoyed the first in this series so I was looking forward to reading this one. I loved it! Even though it did fall into that annoyingly popular trope of they-both-have-feelings-for-each-other-but-won't-talk-about-it that I'm really starting to hate. Why don't people in these books just talk to one another?! Or read basic body language?! Or even just realise that someone kissing you and meaning it, isn't just doing it from pity or because they're thinking of someone else?!

But, the annoyance of that wasn't enough to put me off. I will be reading the rest of this series and I'm certain I will enjoy it!


Amazon UK: How Beauty Saved the Beast (Tales of the Underlight)