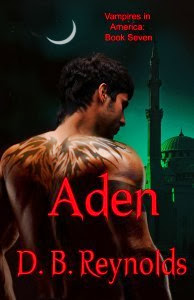 She was seeking revenge. What she found was a vampire who swept her into the darkest depths of passion.

Chicago, Illinois ... the windy city. Home to football greats, dinosaurs named Sue, and, when the sun goes down ... powerful vampires battling for the right to rule the city and beyond.

Born into slavery, Aden is one of the most powerful vampires in North America, waging war on others of his kind in a struggle to become the next Lord of the Midwest. But in the midst of the deadliest fight of his long life, the ghosts of his past have come back to haunt him. Slavery still exists, and Aden is hellbent on destroying it and the vampires who profit from it.

Sidonie Reid is an investigative reporter in pursuit of the biggest story of her career, until that story costs the life of a friend and Sid realises she has to do much more than write about it. Intent on bringing down the vampires and their slave network, Sid gains entry to the highest levels of vampire society, where she finds herself confronting the raw sexuality that is Aden.

Caught up in a dark passion that neither can resist, Aden and Sidonie join forces, determined to defeat the old regime and everything it stands for. The dangers are beyond calculation, but the ultimate reward is worth the risk. If they survive ...

Aden is next in line for Lord of the Midwest, all he has in his way is the pesky challengers. Sidonie has been trying to bring down a slavery ring that she knows the previous Lord had his hand in, so of course she thinks getting in with Aden is the best way to continue - problem is that Aden knows exactly what she's doing.

I love this series and it only gets better with each one. My only problem is that my favourite vampire wasn't in this at all - that'd be Duncan. Although Aden is delectable and thoroughly lickable.

Reynolds is building up to something epic with this series and I can't wait to find out what that is. There's hints and small teases in each new book, we now know where the threat is coming from and partly what Raphael's plans are.

I highly recommend this series to any vampire readers out there. Reynolds' vamps are brutal and aggressive, but still know they have to fit in to human kind. They're not afraid to show what they really are though.