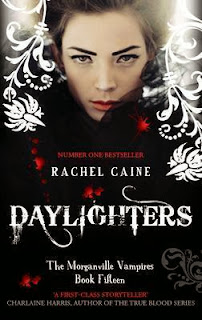 Something drastic has happened in Morganville while Claire Danvers and her friends were away. The town looks cleaner and happier than they've ever seen it before, but when their incoming group is arrested and separated - vampires from humans - they realise that the changes definitely aren't for the better.

It seems than an organisation called the Daylight Foundation has offered the population of Morganville something they've never had: hope of a vampire-free future. And while it sounds like salvation - even for the vampires themselves - the truth is far more sinister and deadly.

Now, Claire, Shane and Eve need to find a way to break their friends out of Daylighter custody, before the vampires of Morganville meet their untimely end ...

So everyone arrives back in Morganville only to be arrested and get split up. They discover the Daylight Foundation has taken over Morganville and ousted the vamps from their post as rulers. Everyone seems happier and Morganville is suddenly safer but Claire, Eve and Shane realise that it's not all it seems and that maybe it WAS better with the vamps in control rather than the weird Daylighters. They find out that the guy in charge has a "cure" for vampirism and is looking for volunteers, but nothing is ever as it seems, is it?

This book saddens me because it's the last book in an amazing series, it also saddens me that the cheesy ending really ruined the book for me. I kinda wish I could go back in time and tell me to just finish a bit earlier and leave on a high.

I don't think I'm going to be able to do a spoiler free review so I'm not going to try. The following section will contain spoilers, you can highlight to read if you don't mind.
{spoilers}The humans of Morganville have put all the vampires together in a sort of concentration camp (actually it's an old shopping mall) where they get limited blood and have to wear shock collars to keep them from attacking the guards. The Daylighters have a supposed cure for vampirism that they're looking for volunteers to test it on, if they don't get volunteers they'll force vampires into it - trouble is the cure has a higher fail rate than success rate and when it fails, the vampires get executed. Michael is grabbed as a test subject and the cure actually works on him - luckily enough just as his marriage to Eve is destroyed due to new laws. Shane's dog bite turns out to be an infection that changes him into some sort of vampire hunting werewolf - again luckily enough for him and Michael that the cure works on him since being around vampires causes Shane to change automatically.

And those last two sections are my problem with the ending, it all ended so happily and quite cheesy in my opinion. As much as I love this series, the ending was a HUGE disappointment. It's all so coincidental that Michael turns human again and happens to solve lots of problems all at the one time.{/spoilers}

The story itself is just as interesting as the rest of the series, it really is just the ending that lets it down. Despite that, I will still recommend the Morganville series to others - it's a great series with lots of ups and downs and some great characters, plus it's getting made into a TV show thanks to the fans (myself included). I love the series and it's sad to see it end.