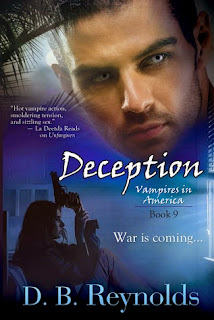 Raphael — powerful, extraordinary, arrogant. He's been eliminating rivals and gathering allies, determined not just to survive, but to demolish the Europeans who think they can steal what he's worked for centuries to create. In a final bid to avert a war that seems inevitable, Raphael agrees to meet an enemy he knows of old. She is formidable, wily, and not to be trusted. But in his arrogance, Raphael believes he can foil whatever treachery she has brewing.

Cynthia Leighton — Raphael's human mate, beautiful, smart, and deadly when threatened. She doesn't trust anyone, much less a powerful vampire claiming to want peace. So while Raphael prepares to negotiate a treaty, Cyn is preparing for the inevitable double-cross that she knows is coming. Raphael worries about saving thousands of vampire lives. She only cares about one, and she will do anything to keep him alive and in her arms.

When Cyn is proven right, when it all falls apart and Raphael's enemies draw on ancient magic to trap him, taking him away from Cyn and out of the war, it all falls to her — to find Raphael, to save the thousands of vampires who will die if she doesn't succeed ... and to kill every single being, human or vampire, who gets in her way.

In previous reviews, I've made no secret of the fact that Cyn and Raphael aren't my favourite couple to read about in this series. However the story in this one was so good that I forgot that fact whilst reading.

This is the start of the war that's been threatening for the last few books and it was certainly a doozy of a beginning. The Europeans first order of business is kidnapping and weakening Raphael so one of them can challenge his Lord ....ship(?) of his region, knowing that it will end in a default with Raphael being incapacitated.

With Raphael being laid low for the majority of the book, the action was actually on the down low. The main story focuses on Cyn doing her best and using all her resources to find and free Raphael - she's doing it for selfish reasons but it'll also save lives.

I have to say that, as much as Cyn manages and the actual work she pulls off, she came across as a bit pathetic in this book - it really didn't up my feelings for her. She was grieving for her mate as if he were dead, but all the while she was certain he was alive and that she'd know if he was dead. I just felt a bit "bleh" reading the scenes with just her and her thoughts and feelings.

But that doesn't affect how much I like this series and I will continue to read it because there are other characters that I love. I'm hoping Elke gets her own story soon, as well as more from Juno.

Oh, I'd also like to read more Robbie, and possibly even something from Ken-Ichi. You know what? I'd be happy with more words in general.