Country vs Country - Daughter of Smoke and Bone 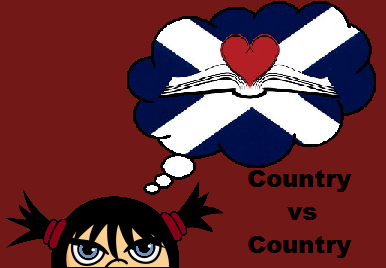 The layout for the following is confusing. The first two books go (from left to right) UK, UK hardback then US. The third book is where it gets confusing - it's UK, UK hardback/US (same cover) then UK kindle (seems to be separate for some reason)

Julie-Anne: The UK paperback cover is very boring. Is that a door to an underground bunker? On the other hand, the hardback cover is very pretty, I like the feathers. And the US cover seems to follow the feather theme with the mask, I like the flash of blue on an otherwise plain cover. I think I have to go with the US cover for this one, I like the blue and and the typeface is better than the UK ones.
Danielle: I actually like the red door on the first one. Not the best of the three, but I like it. I find it intriguing. I love the colours on the UKHB. The purples and blues and greens. Really pretty. I like the blue on the US cover too, but I think I like the middle one best. This is a set I actually quite like all three covers on. But I choose #2. I really love the colour combination.
J: I agree that they're all pretty, even if I find the UK one boring.

J: The two UK covers are obviously following the same theme but with slight differences, and again we seem to be on a door theme with the knocker. I like the flame on both but I prefer the hardback over the paperback. I really like the flash of red on the US one and her eyes are fantastic. US wins this one for me.
D: Again, I like elements of all three. I like the lion in the knocker on the first one. I always wanted a house with a really cool knocker. The red mask on her eyes in the US is really striking too. Really pretty concept, and different from all the YA books out there that always seem to be the same these days. I was going to pick the first one as my choice, but I think for a YA book, #3 is better. If it were an adult book, I’d choose #1.

J: Another door theme for the UK paperback cover and the hardback has the same cover as the US one. Which is annoying in that it will now not fit in with the rest of the series. I do like the UK kindle cover but it’s a bit boring. I prefer the UK/US cover in the middle, again the focus is on her eye and I like the flash of colour (even if it is yellow).
D: I like all three of these. I agree, the Kindle cover is a bit boring, but I do still like it. #1 seems to combine the colours from the other two books together. I do like the UK/US, but I dislike the antlers. Why antlers? The other two both had beautiful masks of sorts, and this one is antlers? I’ll choose #1 here.

Julie-Anne: For me US is an overall win on this. Which is surprising because I do usually prefer UK covers, these UK covers are quite boring though. I like the sound of the series and think I'll give it a bash at some point.
Danielle: This is a series I have not read. The UK covers have made me curious with their door themes. Why doors? Is there something about doorways in the series? And with the US covers and their masks. Is it doorways to masked balls? I'm interested enough to also put these on my list. I've heard very good things about this series. Overall, I think I chose mostly UK covers, but I did like aspects of all of them.
J: I looked up the series and the first book says something about handprints on doorways so that kind of explains the door theme.
Posted by Julie-Anne at 16:23

Labels: cover vs cover, daughter of smoke and bone, laini taylor, uk vs us