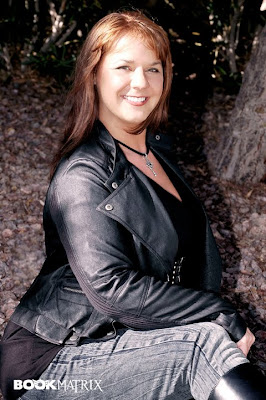 Teenagers are greatly under-appreciated. Until one of her students read a piece she wrote and told her she should become an author, Julie never seriously considered it. To this day, she still appreciates the wisdom and council of teenagers.
No longer teaching, now she splits her time between raising her own kids and living in the world of her imagination (where her children occasionally visit). They reside in southwest Michigan with her wonderful (and very patient) husband and the faithful German Shepherd mix they're all convinced is a person trapped in a dog's body by some sort of curse. She doesn't want to change him back though--it'd be too hard for him to lie on her feet under the desk if he was human.

In the run up to the release of Pretty Souls, I asked the author for a wee interview. Don’t expect this to be like other author interviews you’ve read though. It’s my first author interview so I thought I’d try and ask some different questions, maybe get a wee giggle out of Julie. I have the pleasure of knowing Julie personally (although I tend to call her Sel as I first met her online) and she’s as gorgeous in real life as her picture has you believe.

First off, the book related questions. Why don’t you give us a quick rundown of Pretty Souls?

Pretty Souls tells the story of Elle, a bitten werewolf, and Cass, her half-vampire foster sister. Though oddly matched, the girls work together to hide their true natures from everyone around them. In addition to spending their days as normal human teenagers, they sneak out at night to keep tabs on the generally quiet supernatural population in their town. When Pretty Souls begins, they find someone or something is turning people into voodoo-style zombies: still alive, but no longer themselves. On the journey to catching the bad guy, Elle has to deal with bullies, tutors, half-demons, first love, loss, betrayal, and the beast that inhabits her body day and night.


So are any of the characters (even slightly) based on anyone you know?

The sisters are physically (and only physically) based on two of my nieces. Elle runs cross country, and at one point the niece in question was in fact a runner, but not anymore, nor is she particularly hairy even at the full moon. My other niece has never been a cheerleader, nor has she ever drunk the blood of neighbourhood animals (at least not to my knowledge). So yes, but only in regard to their human physical appearance.


Who is your biggest literary influence?

Kelley Armstrong, no question. Not only do I love her writing, but the online writing group on her website was also what pushed me to improve my own craft. If I can manage a career anything like she’s developed, I will be an extremely happy woman.


Who is your biggest literary crush (excluding your own characters)?

Right now there is this steaming hot incubus named Brystion (from Allison Pang’s A Brush of Darkness) who makes me drool. I also have this strange crush on Adrian from Richelle Mead’s Vampire Academy series (though some of the people I’ve seen suggested to play him on screen? Uh…no). He’s just so wonderfully damaged, yet seems such a true soul that I adore him.
(I love Adrian too – JA)


Now onto the non-book related questions. As a parent, you must watch a lot of kids TV. What programme is your favourite? And we all know there’s at least one, if not more, that you actually enjoy.

LOL I actually don’t mind a few of them, though some it’s more for the opportunity to make fun of them than anything else. One that I just love on its own merits though is Phineas & Ferb. The kids on it remind me so much of mine, it isn’t even funny. Besides, any show with a pet platypus who is actually a secret agent is an automatic win.


What was your favourite childhood toy? Any that you always wanted but never got?

I don’t remember having a favourite toy. I had a bit of an obsession with stuffed animals, but I can’t name one that was my favourite. And it wasn’t a toy but I remember asking for a pony or riding lessons every year for ages. Finally had to pay for them myself once I was an adult.


What’s the worst fashion trend that you’ve ever followed?

Jumpers. What the hell were people thinking…including me? I have a long torso, so jumpers inevitably went places they weren’t supposed to go. Horrible, horrible memories. *Shudders* I should write a horror story about killer jumpsuits.
(I’d read it! That’d be full of giggles, I’m sure. – JA)


Can you tie a cherry stem in a knot with your tongue?

LOL no. My husband can though, and so can at least one of my best girlfriends. And that’s really all a girl needs, isn’t it?


If you had to wish for a mythological creature to be real, which one would it be?

(Must remember to be the good twin…) I always kind of wanted a Pegasus growing up. Unicorns were cool, but really? Is there anything better for a horse-loving girl than one that can fly? Oh, but I want it to be black. White horse and me? Yeah. No. Must be black.


So that’s my short interview with Julie Particka and the review for Pretty Souls will be posted in a few weeks time. Please come back and read it!